Thanks you for introducing us to Hassani's work - it took me down several different routes before finally deciding what I wanted to do.
I've been able to follow through with my original idea and focus on Shamsia Hassani's use of self portraiture. Unlike Hassani there is no political message behind my work, rather an expression of concern about the impact of people's backgrounds on their ability to fulfil their potential. 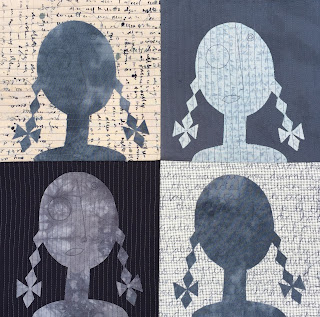 As with my previous challenges I have tried, where  possible, to bring in some of my African experiences to make it my own.  The streets of Afghanistan are very similar to the streets in Stonetown, Zanzibar so I browsed thru my photographs from our time in Tanzania and found this photo of the ruins of an old fort which gave me a perfect platform to have fun with. 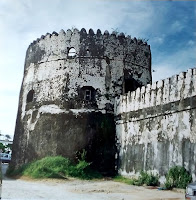 Being a very strong Muslim Island the use of Henna designs on hands and feet are very obvious and the visibility of in particular the adornment of the women of the Masaai Tribe with their beaded headdress and necklaces have given me my inspiration for my street art. 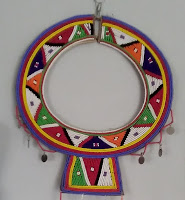 My piece is a whole cloth, painted.  Painted lutradur has been stitched & cut out with a soldering iron, the Masaai heads fused and then adorned with my dotty tool, and the rest of the piece free motion quilted or embroidered in the case of the grass. 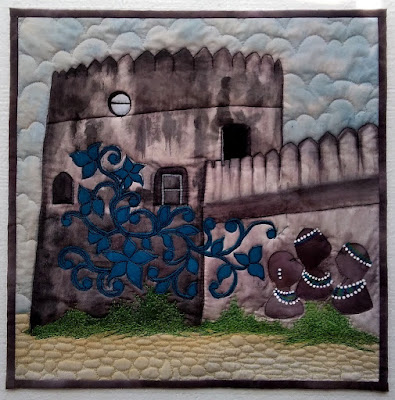 As I have not used one particular piece for my inspiration I have not posted anything.
Posted by Phil Fisher at 10:15 12 comments: Links to this post

I have enjoyed finding out more about Shamsia Hassani and understanding why she makes the art she does. I have enjoyed looking at her large murals and the small pieces when she uses her 'Dreaming Graffiti' concept. I like the way she is focussing on portraying the positives with the story she is telling.
I understand street art is not everyones idea of art, and the word 'graffiti' can put some people off, but I hope everyone got some pleasure from this artist.

I chose to follow through on her 'Dreaming Graffiti' concept and used a photograph of a hurricane damaged building that I took recently and added some painted images in Hassani's style.


The story behind the picture:

The location is not somewhere most people would expect to find a building in this sort of condition,  in fact, I think it is a very well kept secret (I would say over half of all the buildings were in a similar state). A good proportion of the population have left the country as when the tourists stopped coming, their jobs in the hospitality industry disappeared. Hotel owners took the insurance money and left, so rebuilding did not happen. The tourists found other places to go and the Government lost most of its tax revenue.  As a result  and the whole place has a very bizzare sanitised abandoned look about it that is difficult to explain. Despite this,  those who remain still have an optomistic outlook on life and have a positive attitude. 'Forward, Upward, Onward Together is the Bahamian national motto, which I think echoes the message Hassani is also sending to the world too.

At first I got caught up in her cause and the politics and the result was insincere and trite.  It wasn't until the last minute that I woke up to taking elements of her work and this is the result.

The inspiration was drawn from these pictures. 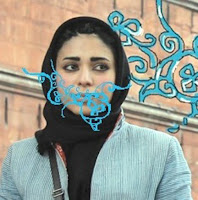 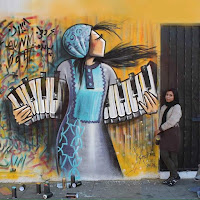 Applique, and paint (Jacquard Lumiere).  Perhaps if I hadn't been working against the clock I might have positioned the scrolls better...

As has been said, Hassani sends her message out in her graffiti work in a very different and brave way of getting her message out to the world.  I used a stencil for the centre design and used oil paint sticks which represents the barrier that these women are put behind in their society.  The figure is hopefully giving out the message that they desire more from their life in music and dance.  I used intense blocks to paint the scarf and to give it more life.  Hopefully I have portrayed something of what her art represents.  I took my inspiration from most of what I found of her works.

SHARMSIA HASSANI
To have a graffiti artist to interpret was an interesting exercise . Initially I gulped at the challenge but set about trying to understand Sharmsia's message . The lack of freedom for many women is what is reflected in her work and she sees art depicting women confined in their clothing and having little self expression as a way of portraying this .In my interpretation, taken from one of Sharmsia's images,  the face has no expression and her eye is closed but  the wind is catching some hair and there is music in her head to give her joy . The buildings are there to show where graffiti art is mainly done. Eyes may be just visible but can see much. 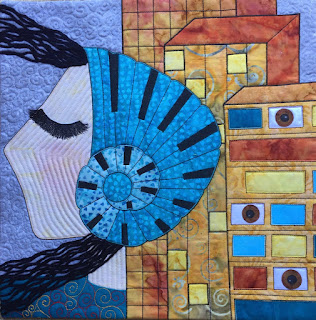 Posted by Rosemary at 05:13 8 comments: Links to this post 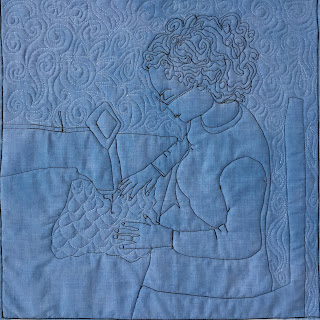 I had a very hard time finding my inspiration in Hassani, not because I don’t admire her and her work, but because it didn’t speak to me. I was finally inspired by her many self portraits and use of blue and spirals to create this. I am not really thrilled with it, but it fulfils its mandate. 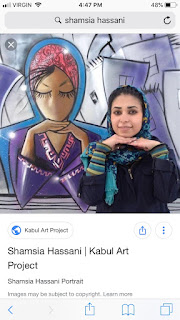 Posted by Helena Scheffer at 04:00 12 comments: Links to this post

I certainly admire what Shamsia is doing and I also admire her courage in trying to put her art out there.  One thing that caught my attention is that she uses photographs and draws on them.

So I have tried to take my love of photography, and my hesitant Photo shop skills and come up with lettering on one of my photos.  This view of the end of a glacier was taken a few years ago when we went on a Northwest Passage trip.

I hummed and hawed about how much quilting to do.  So I didn't do much.  Skies are always a problem for me, and I didn't want to mess with the picture.  If you think I should have done more, please don't hesitate to say so. 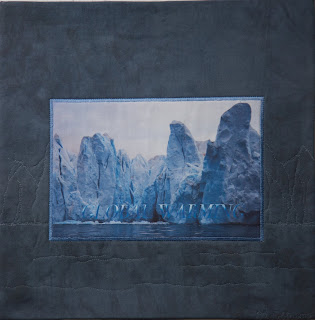 Posted by Dianne Robinson at 03:00 9 comments: Links to this post

And the next chosen one is:

Thanks for the very inspirational graffiti artist Shamsia Hassani – she is so brave doing her art in that society and all over the world!

I started my piece by finding a dramatic and sombre – looking colour for the sky. The building was worked on a rust – dyed fabric with pens and brushes bringing the building to life. Quite accidently, by using lace overlay, the effect looked like peeling paintwork. Organza and oil pastels gave me the colours on the building. The graffiti was appliqued on lastly. The foreground was also the rust – dyed fabric with a little bit of embroidery here and there. After making borders with teabags and organza on canvas I changed my mind and used an upholstery fabric instead.

Since doing this piece I am looking at dilapidated buildings in Durban in a different light and photographing them to recreate in fabric. 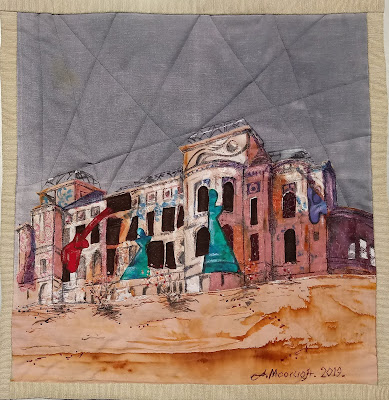 Posted by Allison Moorcroft at 00:00 9 comments: Links to this post

Continuing in a nationalistic and feminist vein, I am  choosing Mary Pratt, a Canadian,  as the next artist.  She was brilliant at portraying very mundane things - you will see this when you look at her work.  She was, as a female, not given the credit and acknowledgement that she should have received from early on  - what is new.  She doesn't seem to have a lot of variety in her work - I know that this has made things difficult for us in the past.  So what I would like you to be influenced by is taking the ordinary and making it appealing.  But that being said, I don't want to direct you and hope that you will simply enjoy seeing her work.

Here are a few links for you.


The Otherworldly Luminescence of Mary Pratt's Art - thewalrus.ca‎ - pick this up on google.

Posted by Dianne Robinson at 14:53 3 comments: Links to this post

I guess I have to toot my own horn with this amazing news.
A Celebration of Color


Quilt Festival Chicago announced A Celebration of Color winners. This annual judged competition is open to quilters working in any style, and who like to play with color to create a vibrant work. Congratulations to SAQA member Helena Scheffer for her Best in Show win! 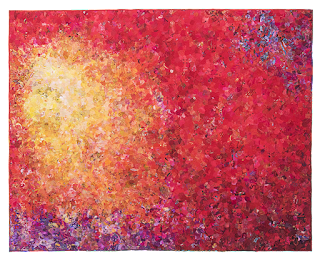 Posted by Helena Scheffer at 00:19 7 comments: Links to this post