Sorry for the delay.  I couldn't get on to post on this blog.  It kept putting me on my old personal one.

When I saw the architect I was quite excited.  But somehow really had trouble coming up with a plan - inspiration failed me.  Until the last minute!!  I love the mosaics and the colour, and I liked some of the window frames such as those in the Casa Batlló.  And I liked that he didn't do straight lines. 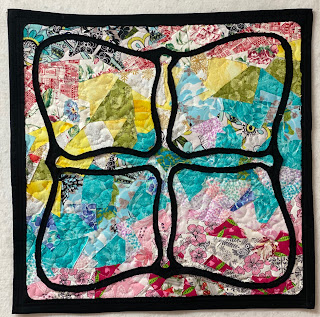 wow! Everyone’s quilt  was so creative and did so well. I am sorry to inform you that I am tired to death since I moved to Tianjin with my husband at the end of February this year.

I need more time to finish this project! I'm so sorry!🙏

You might not be surprised to find that I find Gaudi's rambling, evolution of design not to my taste.  I needed to regularise this somehow.

I started by looking for recurring motifs amongst the many photos available on the web but having found them, wasn't sure what to do with them. The one photo I kept coming back to was one of the benches at Parc Guell. This is the only CC image I can find to share, the one I was drawn to was taken end on, showing the rise and fall of the seat tops. 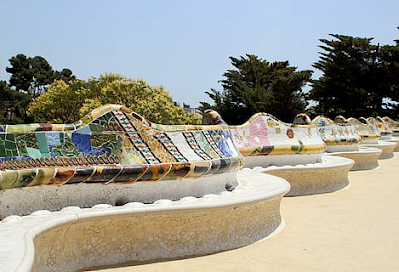 I used the seat tops shown in that photo to frame my collection of patterns: 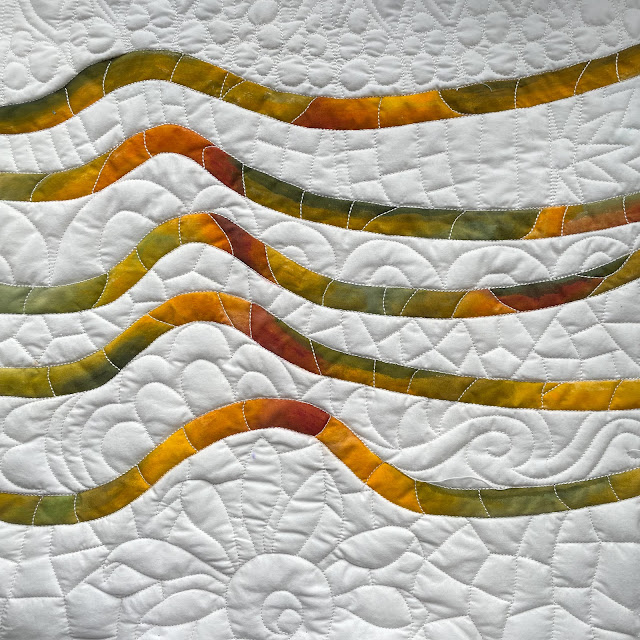 I too went to Bracelona for the Quilt Expo, many years ago, and absolutely loved the Guell Park, so that was the obvious place to look for inspiration. I went through all my photos (and that took some time), rejecting the obvious candidates as I was determined, this time, to not just do a photo realistic copy of one of my pictures. Two photos stood out. 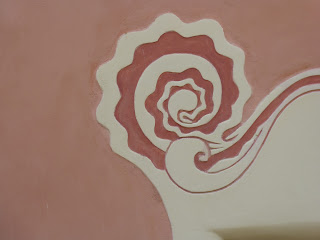 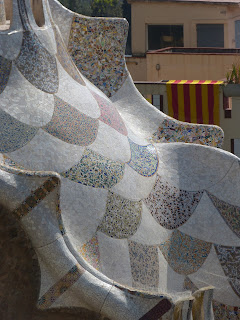 Later I realised that the first photo might not actually be designed by Gaudi as there was at least one house on the site before he started work. Hence the question mark in the title. I then turned to my favourite computer tool, Illustrator, to help me generate a spiral that I could use as a starting point. Whilst playing in the program, and with the help of Youtube videos, I found a shape I loved and started work. The piece is 16 inches square, and some of the mosaic pieces ended rather smaller than I had expected. I initially outlined the main shape using a twin needle, but the line ended up too uneven and I wasn't happy with it. I couched gold thread over the edge, which improved the look of it, even if I worried I was veering too much towards Klimt rather than Gaudi. It also caused the entire piece to puff up, so my quilting in the plain spaces had to be denser than origianlly planned. It would also benefit from being blocked, but despite my smugness at starting early, I only managed to finish the piece late last night. Overall I'm pleased with it, and my husband likes it too which is always reassuring.
Posted by Linda at 09:44 8 comments:

Casa Batllo - inside out

It took some time to settle on what to do. I wanted to use photos I had taken of Gaudi's palace in Astorga - worth a look if you haven't seen it - but couldn't find my muse there. In the end, I settled for this wonderful image looking out from inside Casa Batllo. There was so much going on. (From Skip The Line website) 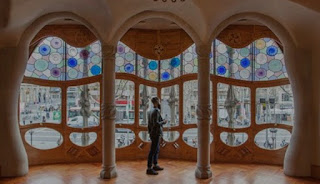 It really stretched my skills but mostly my patience - especially with the circles for the windows. 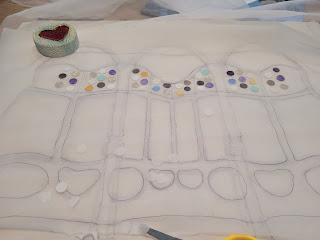 I stitched the outside view and overlaid it with sheer fabric as windows. 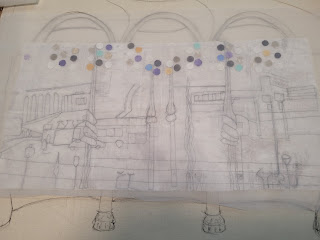 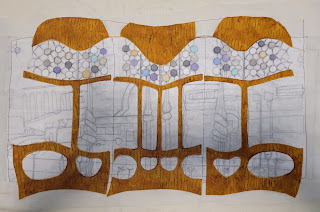 I got ahead of myself and put it together before colouring the background! I am trying to remedy that but have had to abandon finishing touches which I was due to do yesterday as, instead, I spent the day in NZ ED with mum watching her health decline as the flood waters rose towards my home in Lismore, Australia. Fortunately, the trajectory of both has been halted and my house is saved but the situation of friends, family and neighbours is just too distressing to comprehend. Anyway, I will titivate it a little when the time comes. So, here we have it. Oh, can't photograph the colour quite right. 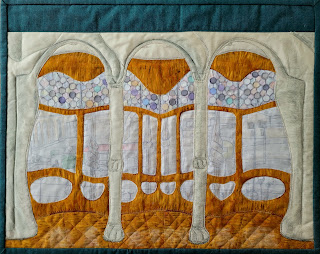 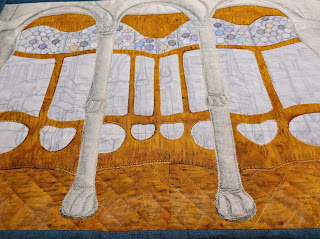 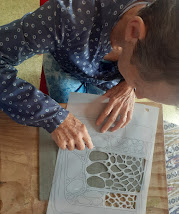 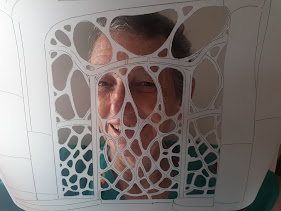 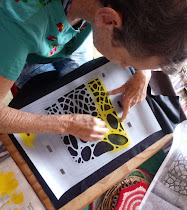 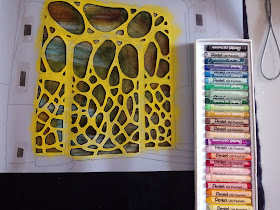 I chose Antoni Gaudi’s massive Iron Gate in the Casa Mila (La Pedrera). The gate gave access to the interior of the building and was originally used by both people and cars, as access to the garage in the basement. This is now an Auditorium.

The first two pictures show me cutting and peeping through the Draughting Vellum.

On my piece, cords were sewn on, to give texture to the gate (the wrought iron); the pillars on either side, have course net laid over them, to depict concrete.  The view through the gate was firstly done with fabric paint, which did not work. Then I tried Oil Pastels, but still not bright enough, so fabric snippets and lace were sewn into the gaps of the gate to create a brighter background. I wanted a frame around the piece and used a brown fabric.

I hope I have done justice to Gaudi’s amazing genius! 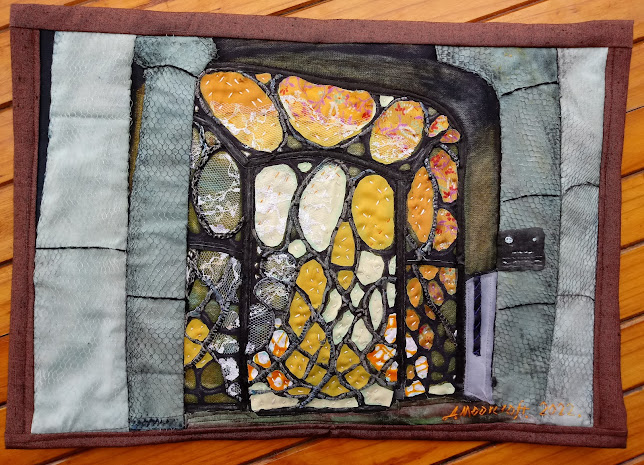 On to the next challenge piece...

I encourage you to have a look at modern Islamic architecture as well as ancient and traditional.  Plenty of scope I think.

Inspired by the Casa Batllo

I found the glass mosaic on the walls of the Casa Batllo to be quite  interesting I especially liked the contrast between the angular shapes of the mosaics and the circles.
https://commons.wikimedia.org/wiki/File:Casa_Batll%C3%B3_(Casa_dels_ossos)_in_Barcelona_by_Antoni_Gaud%C3%AD.JPG
I stencilled the mosaic and made the appliqué circles from a piece of silk from my silk painting days 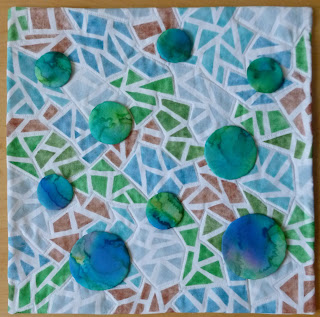 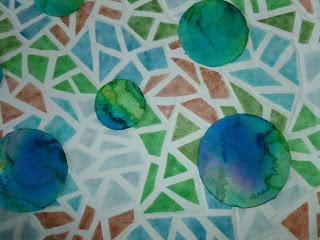 Yes I did it again - I so enjoyed doing the last one that I put up when I chose Gaudi as our theme I decided I had to do something similar.  I did intend to do it set into a wall but ran out of space and it would have spoilt the design.  I was inspired by a stained glass window in the Cathedral but when I went back to try and find it, unfortunately I never found it again.  I think with his architecture, stained glass, mosaics etc one can become totally overwhelmed with his colour and designs among other things he created.  I obviously changed what I originally found and made it my own which is below.  Loved this theme.  I did size it the same as Hilary 20" square as I needed the extra space. 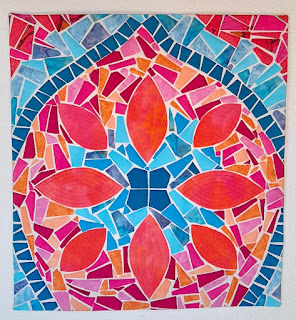 This is my rendition of a mandala - by Gaudi.  I think we were all spoilt for choice with ideas inspired by this wonderful, flamboyant architect.  At one stage I considered a wrought iron dragon gate with a mosaic of flowers in a garden behind (a la Dilys Fronks) but those wonderful, weird, crazy chimney pots mostly hidden away from sight on rooftops in Barcelona called to me. 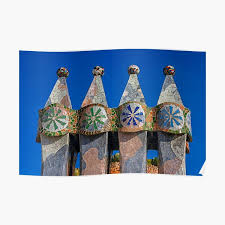 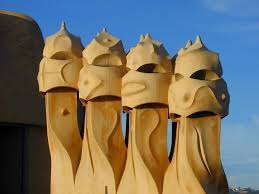 My piece is simple but it was a lot of fun to construct.  Raw-edge applique, mostly commercial fabrics and some Batiks, machine quilting.  It measures just under 20" square. 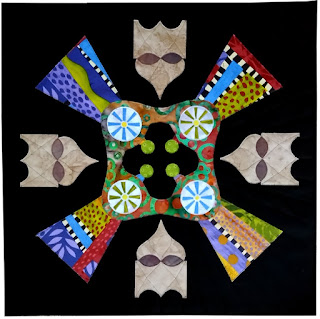 Gaudi was a genius  with engineering and with design . In many of his buildings he inserted beautifully crafted stained glass windows . For my quilt I have chosen a window which was inserted into the outer wall of the Guell colony crypt. 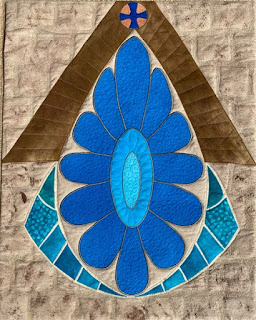 I was in the Kruger Park when the challenge came thru and we had just had an amazing sighting of approx 18 giraffe with their mosaic patterns. This was a sign I had to include them.
Doing my research the inside of the La Sagrada Familia stuck out as all I saw were the legs of a 'tower' of giraffe. 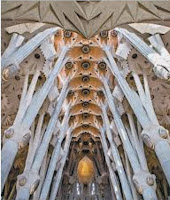 Yes, this was the route I was going to take. After much procrastinating I chickened out and opted for an outside take. 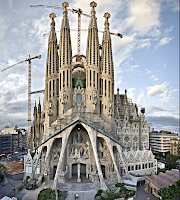 The giraffe could feature at the entrance to a building as the struts are above. 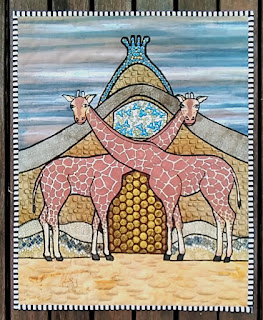 A bit of  cheeky fun using applique, paint and stitch.
Posted by Phil Fisher at 07:22 9 comments: