A trio get together

I can't tell you how excited I am as Rosie, Dianne and I are to meet up and spend a week together in Brittany, France, after Rosie's daughter Lindy's wedding to the lovely Antoine on Saturday.

Photos to follow of what we get up to which includes some sketching, photography and gelatine mono-printing.  Watch this space!

Hilary
Posted by Hilary at 11:25 No comments: 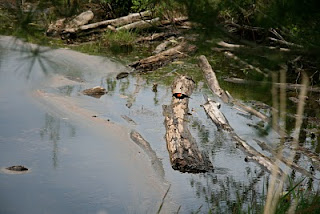 We've been doing a lot of biking in anticipation of a biking holiday in Brittany. This is a pond that we go by, and this is a red winged blackbird. The trail is an old railway bed which has been converted to a bike path and in winter, cross country ski trail. Lovely to go through the woods and past these ponds. 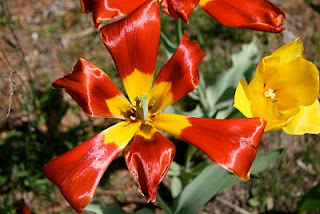 Last fall I planted some tulips at the cottage. I can't at the house because the squirrels will get them - either the bulbs, or the flowers once they've opened - very frustrating. Even at their end, these were gorgeous. Now fingers crossed that they come up again next year!
And I've started on my square. Think old newspaper joke.
Posted by Dianne Robinson at 20:07 1 comment: 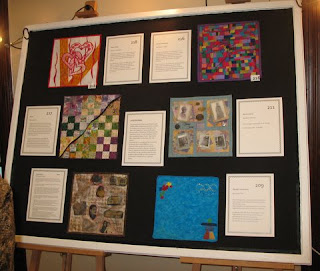 Marion has asked me to send this picture of the Connections quilts made by the Montreal members at the Beaconsfield Guild Quilt Show.  What a lovely idea to give them an airing and to spread the word.  Let's hope they might have inspired a few more people to try this kind of  project out.

Anybody 'seeing red' yet?  It's all in my head at the moment but I have ordered some supplies - well, that's my excuse!

Request! When posting pieces other than the challenge can we all include the sizes of the pieces unless very obviously large and bed size.
Posted by Phil Fisher at 07:22 No comments:

Seeing Red - for a nephew 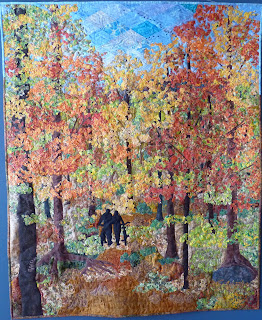 This challenge is a most appropriate one for me - I've been collecting red fabrics for a project for a while - trouble is, I've used most of them. My nephew is getting married in 2 weeks time, to a lovely girl, Louise, and we've had many a good holiday with them in the past. So, being in the middle of making a blue, fishy, quilt, I asked them if they'd like it for their wedding. Cut a long story short - they wanted a quilt, but not that one. They have a red bedroom and wanted something for the wall that they could later put on the bed. 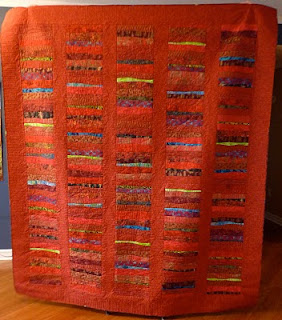 Well, I don't often do commissions, but this is family! My idea for a wall hanging was not going to work as a bed quilt, so I ended up making them two items. 'Going Home' is made using the confetti technique. I wanted the feel of a Canadian autumn, and think have got it. Many thanks to Dianne, Colleen, Pam, Heather and Helena who critiqued it half way through construction, and stopped me mucking it up!
The bed quilt is much less imaginative, and much bigger. Hope they like it! Entitled 'Free Wheeling', there are 11 bicycles hidden in the quilting.
So I've 'seen red' for the last 2 months - there will be a pause before I make my piece for our latest challenge. Think I'll do some nice restful pieces in blue, green, yellow - anything but red!
Posted by Linda at 21:44 3 comments: 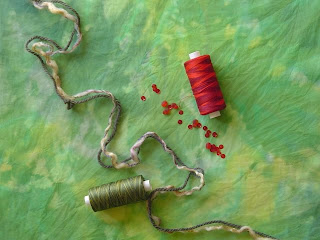 The intro. Unfortunately I will not be able to give you more later as it will be a dead give away. There are two elements left out, again, so as not to give it away.

The background I dyed yesterday using 100% cotton and again my silk dyes as they are in liquid form and quick and easy.
Posted by Phil Fisher at 05:23 1 comment:

Challenge with a difference

Have a look at a different kind of challenge:  take a bunch of very ordinary/going nowhere blocks (from a garage sale perhaps?) and challenge friends to reinvent them into something exciting.

Hilary
Posted by Hilary at 17:06 No comments: