is the title of my quilt and my inspiration.

My aim was that you would never guess what my inspiration was, he,he..... 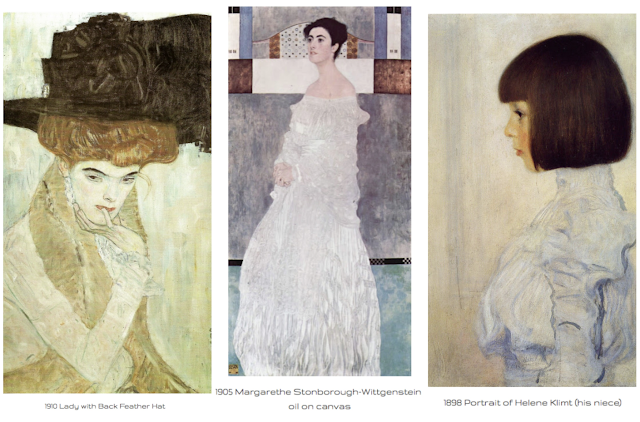 At first I looked for paintings with very little colour in them and I fell for these three wonderful portraits. I decided to incorporate them all by printing them onto fabric, add Heat and Bond then cut them in bits. I  selected the bits I wanted to use and made a pleasing arrangement (to me). Fused to a heavily quilted background, then added some machine stitching.
I meant to include no gold, but couldn’t resist, starting with the border.
Had it in my head for a long time, and it turned out exactly as I had hoped.

Now bring on the next challenge!
Mai-Britt

It was difficult at first to get away from all the gold and swirls which I really like.  My first attempt was not successful.  But then I started to look at his forest scenes and thought that this was way more up my alley.

And then I remembered an exhibit of Wolf Kahn's work that I had seen and thought I would take a look at that style which I also admired.  So this is a bit of a combination of the two. 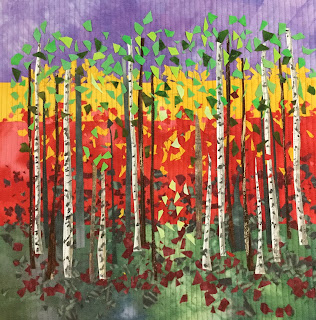 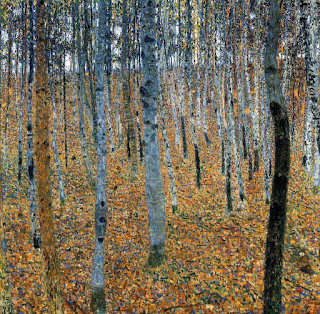 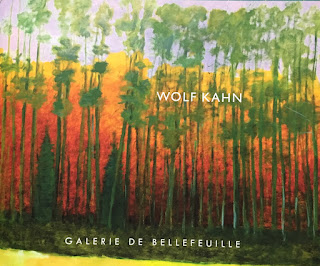 Klimt - Big Brother is watching you...

As I said already in my self-introduction, Klimt is not exactly one of my favorite artists. But I took the challenge, and I found a picture of one of his drawings in one of my art books. Didn't want to have to search for long, and if working with an unpreferred artist as inspiration, it doesn't really matter which painting you use, that was my thought.


I was mostly attracted by the circles on the robe, and took it from there. I had printed a fabric when visiting Ali George in Australia in November 2015 and wanted to use this. Recently I have been including pieces of a reflector fabric in some of my work, and instead of gold, this seemed an appropriate substitue for Klimt's glitter. Add some found washers, start playing around... 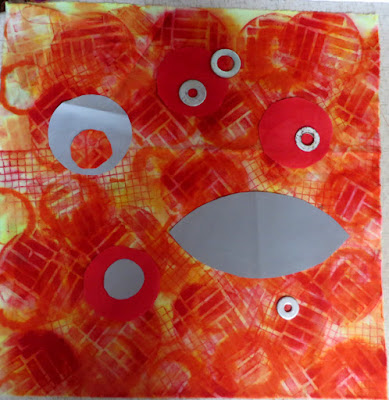 Then I thought the oval just looked too solid, and cut out a piece that could be added in reverse. 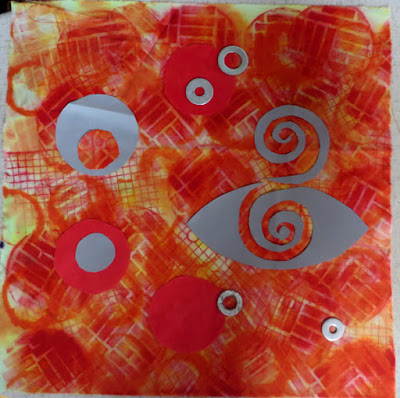 I added some stitching, fixing the washers and applique the reflector fabric - and then I decided I might change the orientation of the whole thing. 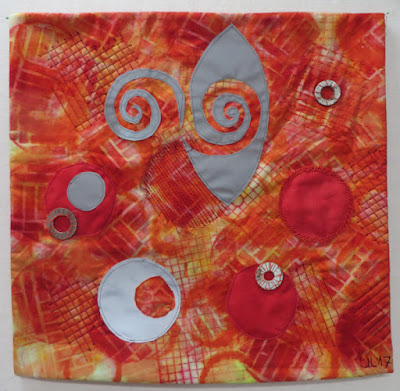 When it's dark and the reflector fabric is 'active', it looks like this, and could be called "Big Brother is watching you." 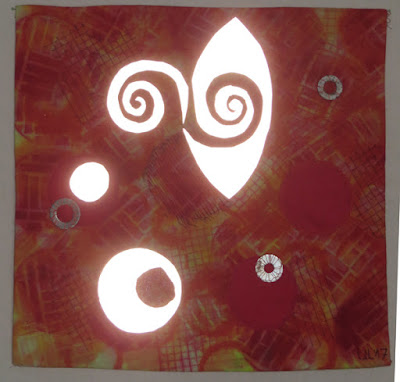 Although I am not exactly sure of the title yet. And might change the orientation back, if persuaded. I just have the problem that I had to finish before I will be leaving for Birmingham and my trip to the US day after tomorrow and needed to get this up before I leave...
Posted by Uta Lenk at 12:19 9 comments:

The time has come for me to bid farewell to this amazingly talented group. I've truly had a lot of fun with the challenges but I need to step back. Special thanks to Hilary for leading the group and organizing such a memorable trip to England. I will continue to follow the blog and look forward to seeing all your wonderful creations. xoxo

Oh dear, what to do with Klimt whose work provides us with so many ready made quilting patterns!  I frequently use a free cut version of the cobblestone block shape that appears in his Portrait of Adele Bloch Bauer and I lingered there a while and also looked hard at the Three Ages of Woman but decided that I couldn't do that particular title justice.

Whilst endlessly scrolling through images and interpretations on the web and my own PC I remembered a photo that I had of an eraser print by Margaret Cooter.  The original was made from carved Staedtler Mars Erasers which are 23mm x 65mm to give you a sense of the scale. 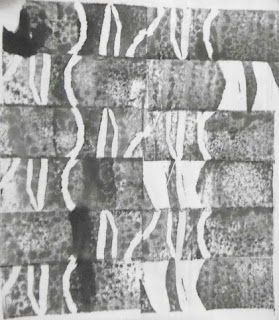 The subdivided sections put me in mind of this section of 'The Kiss'' from which I took my colour palette. Whilst I like his use of grey here, when I tried to replicate this in fabric it seemed to flatten the piece so in the end I stuck with yellows, albeit some of them quite greyed, and black. 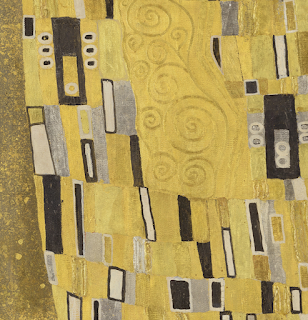 And yes, I totally avoided any suggestion of gold, hence the title. I'm not averse to a bit of bling but it just didn't seem necessary here: 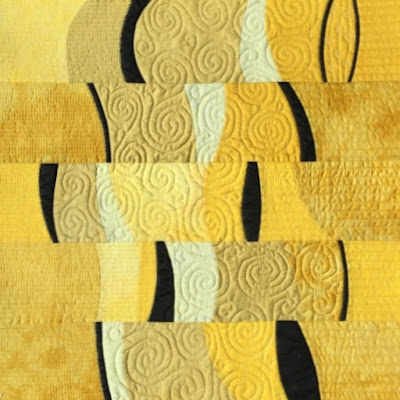 How to make a Klimt inspired piece without it looking like a copy?  Not sure I have succeeded but I had a lot of fun trying. I have taken every piece of material in my stash (in all senses of the word) that has gold and silver in and used them - cotton fabric, plastic, metal mesh and sheet, foiling, lame, sheers - you name it.  Add to that buttons and crystals. 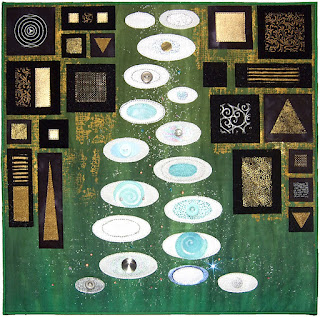 Background is a hand dye from Frieda Anderson which I have screened printed.  Shapes fused in place and machine stitched. Satin stitch around the edge.

Looking forward to the next artist.

I too found it difficult to concentrate on only one piece of  Klimt'w work so took pieces of several of his works.  I must say I enjoyed every moment of constructing my piece together with his designs, swirls and compositions.  He obviously loved the flowing russt coloured hair depicted in a lot of his models, so couldn't pass that one up.  He was also part of the art noveau movement and I tried to capture this as well in the piece.  All in all there were several pieces I enjoyed and incorporated as well as putting my own signature on this piece.  I have called her Clara. 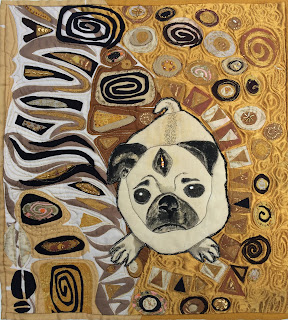 From the moment we decided to use artists as our inspiration, I knew exactly what I wanted to do. I have done several Klimt-inspired pet portraits in the past and it was Lucy the pug's turn, so this was my opportunity. Lucy was painted and stitched and I had tremendous fun beading and adding some glitz, including an authentic Indian bindi on her forehead. The gold background fabric is shiny satin that I found in my collection, and the patterned fabric on the left, with applique enhancement is a piece of a Balenciaga scarf given to me by a friend. Every minute spent working on this piece was a joy.
Here is a detail shot. 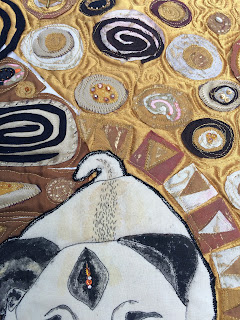 These are my other Klimt-inspired pieces. 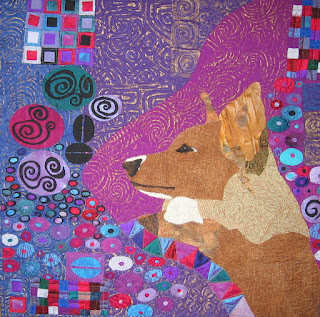 Daisy a la Klimt, my first one. 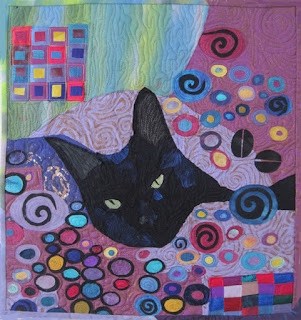 Darth a la Klimt, my second. 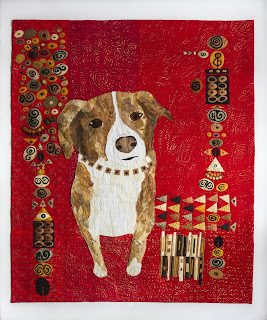 Chloe a la Klimt, my third.

Some of you heard I broke my wrist  three weeks ago, however as it was quite badly I needed surgery which sounds funny for me to say but it turned out to be a blessing as they inserted a plate, wrapped my arm up for 10 days, removed everything and said get on with it, use and exercise you arm. So from thinking it was going to be my turn to be late, voila, all done and dusted.

Last year visiting Hilary we took a drive south and one of our visits was to the Lost Gardens of Heligan which is where I have taken part of my inspiration from ..... 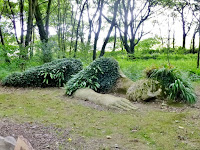 She was called ' the mud lady'.

My colour palette I have taken from this piece of Klimt ..... 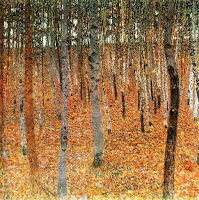 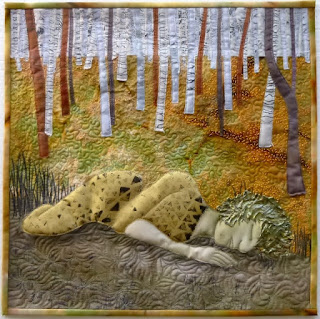 The background and tree fabrics were all from our local supplier, Amafu, which I had in my stash. The forest floor was my starting point.  I used thermofax screens to add details on the tree bark and the lower path fabric.  The lady was painted and appliqued onto the background.  Her hair is moulding paste, added right at the end, and painted.  I have no idea whether this will be permanent. Time will tell but it gave me what I wanted. Machine and hand quilted.
Posted by Phil Fisher at 06:57 8 comments:

GUSTAV KLIMT
To choose one painting of Klimts to interpret was impossible for me . I love so much of his work and so decided instead to look at the patterning and shapes which he used often in his paintings such as the square ,triangle and scrolls . He was also a prolific and popular portrait painter so how could I not include at least part of a woman's face showing a typical hairstyle and fashion of his day? Her face was painted with acrylic paint.Then thinking of his work, and because I am definitely drawn to his use of gold , I added in details painted with metallic paint. So here is my 'Woman in gold'! 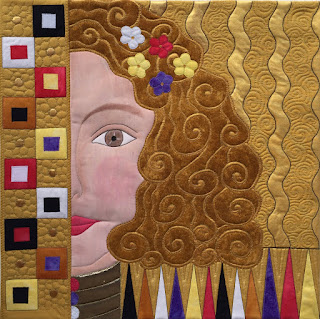 My Klimt is postponed..

Despite "best laid plans", my world has been turned upside down at the moment because of the historic rains from Hurricane/Tropical Storm Harvey that has affected so many people and homes in the Houston area. As I shared earlier, my daughter and her husband and her in-laws suffered flood damage. We have moved them all in with us and are actively helping them get their lives and homes back on track. My Klimt piece is 60% completed and I can see that I should be able to finish it within the next week...but at the moment my energies are directed to helping them.

I can't wait to see all the creations and I will announce our next artist on Friday, Sept. 1.
Posted by Venetta at 04:46 6 comments:

The person to select the next artist, a big piece of news, and Uta's quilt in my possession

Drum roll please, the next person to select an artist is: VENETTA! So get your thinking cap on.
Hopefully everyone is nearly finished their Klimt pieces in preparation for the big reveal day next Thursday. Mine is finished! Has been for a while.... 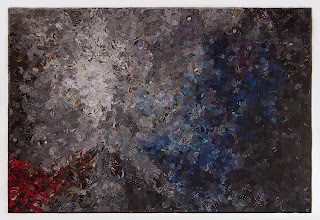 (75" x 55") has been selected for a very prestigious US show called Quilts=Art=Quilts at the Schweinforth Art Center in Auburn NY this fall. I am very very pleased. 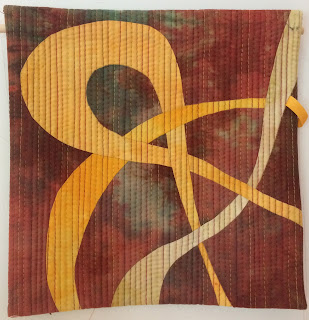 This year's auction begins September 15 and the info is all here http://www.saqa.com/auction. My piece is in Section 1. It is always fun to check out the artwork and see how the bidding goes.