August is a busy month here in bilsblog land so I too have been working on my Klimt challenge, though this hasn't been a struggle. Once I'd decided on the direction I wanted to take, this piece has virtually made itself. I must admit to not having considered the quilting as much as I should have before I began so I'm still auditioning different options to be able complete the piece by my self-imposed deadline! I give you my scraps -

I can't believe it - I have finished my piece - me, the queen of the last minute!!!  Anyway, I thought I'd give you a teaser of the fun I have been having.

Of course there is gold and, and, and...

Hilary
Posted by Hilary at 17:25 4 comments: Links to this post


My grandmother taught me how to knit when I was about five or six years old, and I have been involved with textiles ever since. Patchwork came into my life when I was an exchange student in High School in the US and saw the first patchwork pillows. After a period of self-taught traditional patterns (before the age of internet etc.) I turned to contemporary design in 1994: My mother’s cure for my then newly broken heart was an enrollment in a patchwork class. I started teaching patchwork classes and hand-dyeing my own fabrics a few years later, which has led to a small business with hand-dyed fabrics and a bi-monthly fabric club. I studied with Nancy Crow and other international teachers and am a member of SAQA, SDA, the German Patchwork Guild (currently the International Officer for the Guild) and QGBI. I write an English blog and a German blog (and I try to keep them different in topics).

When my son started drawing at the age of 2 ½ I soon realized that his drawings - completely standard for his development, nothing extraordinary - could be turned into inspiration for my work, and I began using his drawings as a starting point for my quilt designs. This led to a series “Play of Lines” which kept me busy for several years; two large quilts of mine from this series were exhibited in the “Color Improvisations” show curated by Nancy Crow.

Other series of mine are called Shapes, and, most recently, text messages. Shapes began because I had an exhibition in a UNESCO World Heritage with two other quilters which was the first building designed and built by Walter Gropius, later founder of the famous Bauhaus Art School. So we had decided to use the basic geometric shapes, which figured prominently in Bauhaus teaching, as inspiration for the quilts that should be on display there.

text messages turned into a series when SAQA issued a call for entries under that title. I had an idea right away, and then realized that I had already been working with text before. And it adds on to my former academic life, when I was a linguist.

For the past three years it has been slightly harder to find enough and ample time for quilting as I got involved with voluntary work helping refugees in Germany, and for this past year I have been teaching German as a foreign language to a refugee class as well. This is a very important aspect of my life right now, that has also begun to enter my work. It will be interesting to see how it develops here - apart from how the refugee situation in Germany and Europe will develop in general.
Posted by Uta Lenk at 08:53 7 comments: Links to this post

Thank you for the invitation!

Hello everybody. Thank you very much for inviting me to become a member of this group. As I was taking my time to decide whether I was up to the challenge I had to figure out whether my hesitations were because of 'starting with Klimt', or other reasons. He's not my favorite artist - but one grows with the challenge. And I have decided to use the only picture of a painting by him that I could find in one of my art books, so I am all set in terms of inspiration.
I will come back and introduce myself within the next few days and am looking forward to being part of this group! 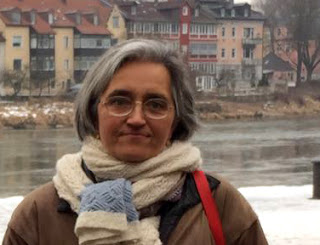 I would like to welcome Uta Lenk from Germany to the group.  She is our new member.  Uta will stay with us even after Linda F has finished her new house and returns to the group.  We will then have a 'Baker's Dozen' which is 13.  Baker's Dozen

You can read all about Uta on her website  where you can see many of her beautiful quilts.  Her CV is very impressive.  Colleen - a fellow long arm quilter to keep you company!

I  am personally excited to have her on board and she will join us starting with Klimt.

Welcome, Uta.  I hope you enjoy your time with us as we travel through series 3 and the challenge of being inspired by artists chosen by our members.

Hilary
Posted by Hilary at 16:34 7 comments: Links to this post