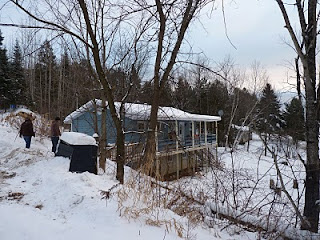 Season's greetings to you all. I've just spent a week in the peace and quiet of the Quebec countryside with my husband, daughter and her fiancee and am feeling recharged for the year ahead! I've had a few ideas for the Connected piece, but have yet to start the detailed design process. In the meantime, I thought I'd try my hand at posting some photos.
Here's the cottage where we stayed, right on the edge of a l
ake/river. Temperatures varied from +2, which allowed us to make snowmen, to -22 (-8 F)!!

We walked (and fell) in the woods around the cottage whilst snow shoeing, tried the hot tub, and read lots. We also ate and drank too much, and generally enjoyed ourselves. This is a wonderful country to live in, though if you get fed up with lakes and trees quickly you might not enjoy it quite

so much. And at this time of year, with snow and ice glistening in the sun, it is magical. I feel very lucky to have had the last year here, and, hopefully, the whole of 2010 still to come!
Posted by Linda at 17:41 3 comments: Links to this post

Season's greetings to you all, and all the very best for a prosperous and productive New Year.

I have spent a lot of the day mucking about setting up a new blog... which I hope I've set a link for above!! Click on 'the Duck Hilton' ;-D

On Boxing Day, I am ashamed to say, one of my otherwise indoor cats escaped for literally a few seconds.... at exactly the same time a mud lark fledgling appeared between the pot plants. The result was swift and terrible. I quickly managed to separate them, and could find no wounds on the baby, but the shock, and the possibility of unfound puncture wounds must have been too much.

Later the same day my ducks harassed a second (and also unflighted) member of the family and as a result I gathered up the 3 babies and tried to put them somewhere safe for the parents to claim. The outcome was less than successful, and it was raining. The parent birds refused to have anything to do with them, so several hours later and before they succumbed to the cold and hunger, I had no choice but to gather them up again, set up a brooder box and try to keep them warm, safe and fed. The baby that had been attacked died that evening, another sibling who refused food died the following day, but Muddy is soldiering on. I have him outside most of the day now and already when I call out 'any hungry larks in the house?' he responds with begging noises. I hope he'll learn to fly and be independent in about a week - fingers crossed!! I will keep his story updated on the Duck Hilton blog too :) 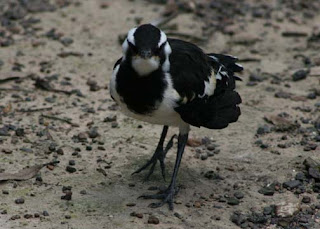 I wanted to take a picture of me and my snowy back yard with my thermometer showing minus 16 degrees Celsius but the days are too short and it was just too cold so...Seasons greetings to you all and very best wishes for 2010. Marion
Posted by Marion Perrault at 00:20 1 comment: Links to this post

At last I am connected to our blog (hopefully). I trust you all have had a good holiday time over the past few days. You will note that I come up as Richard. Please ignore this as if it does come up with Richard it is really me (Patricia) as my husband has a google account and it was easier to use that one and I don't have a clue as to how to open a Google account. However I will work on that one and see how I go.

Patricia (A'Bear)
Posted by Anonymous at 08:44 4 comments: Links to this post

Wishing you all a creative explorative meaningful 2010My new year's message to you all - stay connected!Love Pam in MontrealP.S. Please be patient with me, my blogging skills are nonexistent
Posted by Pamela Chasen at 00:18 2 comments: Links to this post

I would like to wish everyone a quiet, peaceful Festive Season.  And here's to a wonderful creative 2010.

My apologies for using this method but I am having a really bad time upgrading from XP to Windows 7 and all I can say is thank goodness for backups.  If you make only one New Year's Resolution make it:  I will backup my files at least every month - preferably on an external hard drive or CD.  This has been the only glimmer of light in my struggle so far.

I have the old laptop but that has only a few of my addresses and none of my programmes (it is an old machine and limited capacity).

PS  I have some emails on the old computer which I cannot read - apologies if it is urgent.  H
Posted by Hilary at 07:49 1 comment: Links to this post 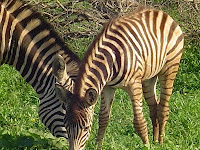 I have just returned from 10 days on the banks of the Crocodile River in the south eastern corner of the Kruger National Park ... where SA, Mozambique & Swaziland all meet ... at a resort called Ngwenya River Lodge. Reviewing my photos the one night, as I came across this picture I immediately thought ...physical, family, linear !!! However I am still sticking with my original thought pattern.
Posted by Phil Fisher at 06:01 3 comments: Links to this post

Several of us had a great day last week playing with gelatin printing.    For those who don't know, it's a form of monoprinting.  A 1/4" layer of gelatin is prepared and turned out of it's mold.  Then painted, a decoration placed on it (everything from elastics - very effective, to leaves, netting, string - you get the idea) and then the fabric patted on top.  The first round leaves a clear impression where the decoration was.  Round two produces a more interesting result - the decoration is removed and since some, but not all the paint is on the first piece of fabric, what happens is a pale background, with a darker image where the decoration had been.  I think a few photos are in order!

Posted by Dianne Robinson at 00:51 3 comments: Links to this post

A connection to Global Warming? 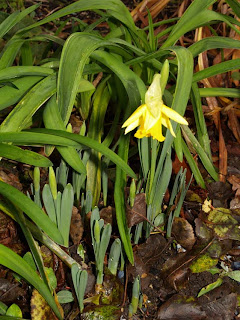 This is totally ridiculous!  A daffodil in flower in my garden at this time of the year.  A couple of frosts and then a temperature rise of a couple of degrees and the poor plants think Spring has arrived.  I know we live on the English Riviera but.........

Posted by Hilary at 10:44 No comments: Links to this post

I realise this is a busy time of the year for all.  My reason for giving a hint was not so much as ask the question but to invite you all to share your thoughts and ideas.  If you look at the original 12 group's blog their theme is PINK and they have been posting all sorts of images of pink things and talking about how it has made them move out of their comfort zones or challenged them to work solely in pink, etc.  One of the 'pink' girls has laid out all her fabrics she's going to be using.  There is a dialogue going on.  It is possible to talk vaguely about the road you are taking without giving away your design.

Some members are either too shy or maybe scared of the technology to post or comment.  Now is the time to get over any barriers and get comfortable with posting a photo, etc. before it becomes important.  How about it?

Hilary (who hasn't started her piece yet - all talk and no action!)
Posted by Hilary at 08:02 1 comment: Links to this post

This morning on the coast

My daughter had to be up very very early this morning to take her friend to the station. Last night we decided it would - therefore - be a good idea to go 'do' the sunrise photography we've planned several times recently but havent followed through on!!

37 degrees here yesterday, so it was a bit of a surprise as the sun came up to see 7/8ths cloud cover!! A few hours later its all burnt away and we are in for another scorcher!! So we'll try again tomorrow, but here are today's pics :)

Fishing boats at Greenwell Point, and view of Culburra Beach with Mt Cambewarra in the b/g 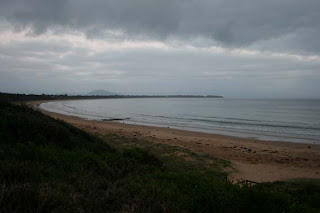 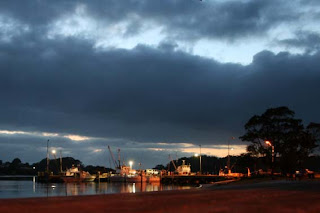 The theme has me firing on all cylinders, I'm thrilled - its been 2 years since I did anything meaningful and I have 3 ideas I'm going forward with already.
1, delving into connections with the past, with women, between women, mothers etc
2, the same, but different direction
3, planning a bigger piece based on the first
4, got to get trains in there some how!
Have ordered some thermofaxes so going to be screen printing, I am positively HUMMING with ideas and it feels sooooooooooooooo good.
Meantime my ducks have been playing with the hose in the hot weather, thought you'd like to see my babies having fun.
Catchya
Rosie 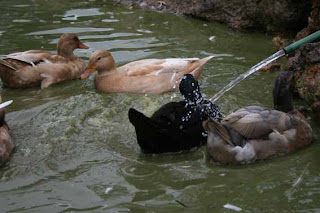 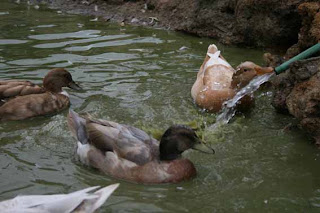 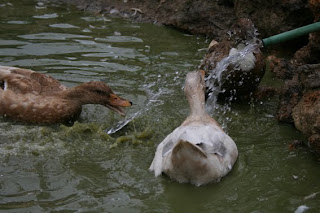 Posted by Rosie at 09:47 No comments: Links to this post 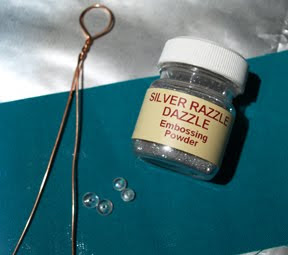