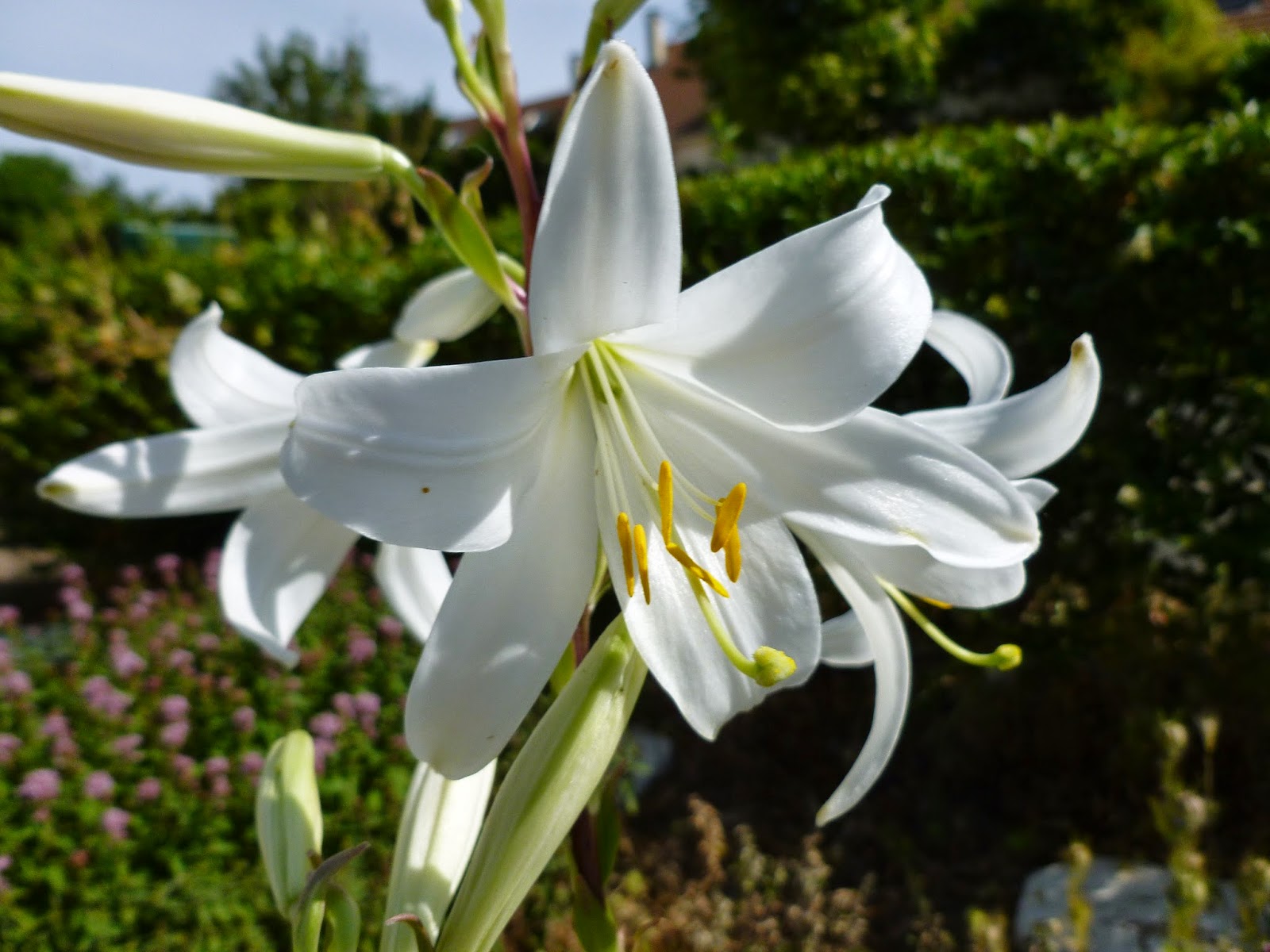 Lily white
Posted by Jinnie at 15:04 5 comments: Links to this post 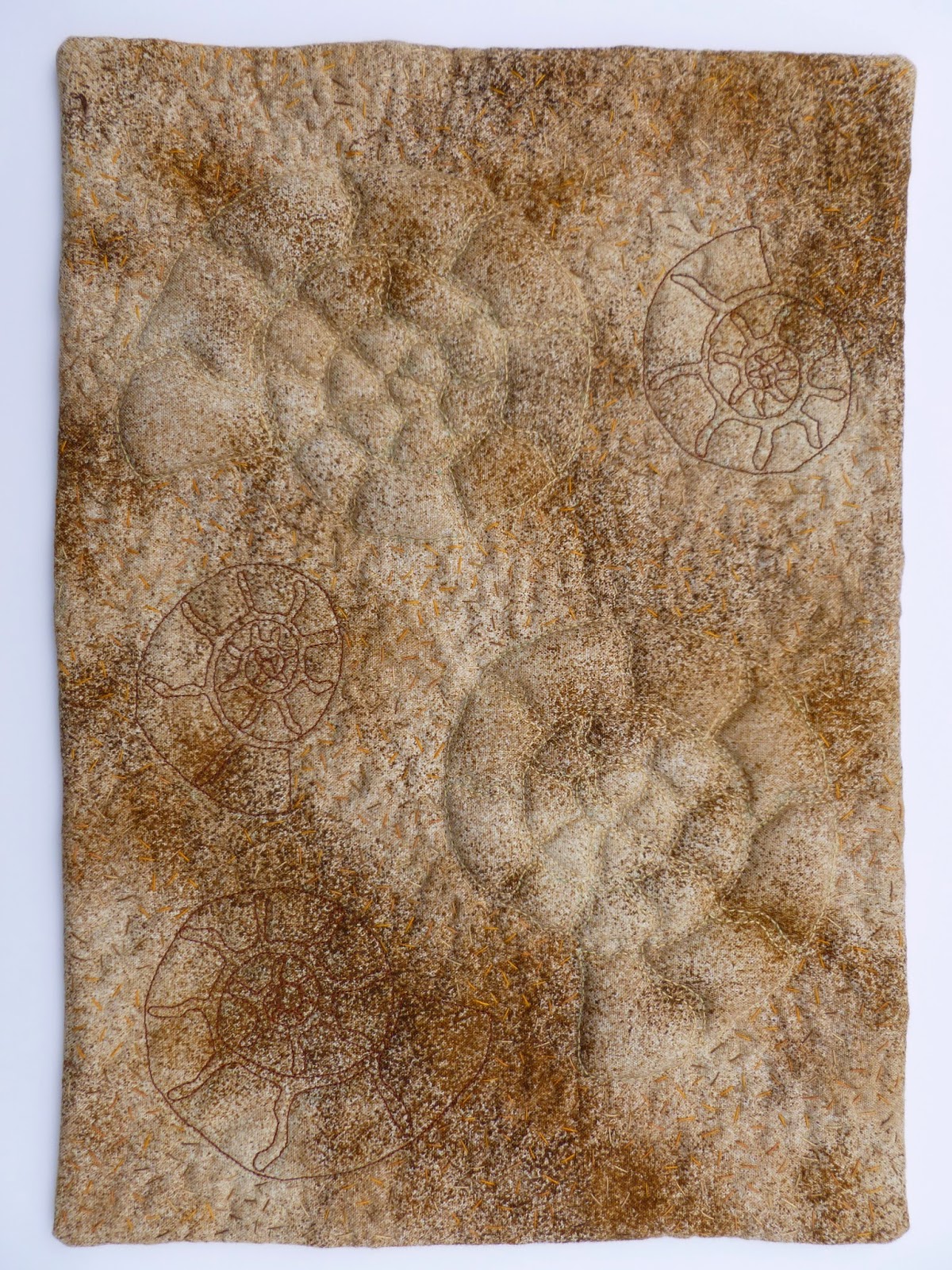 The photograph of the cliffs that Hilary posted when she chose the colour made me think of the cliffs at Lyme Regis and the fossils found there. I decided to 'find' my own fossil ammonites in hand sewn trapunto done on  a commercial fabric. I hand quilted it with seeding and added some machine quilted ammonites. The latter should have taken just over an hour to do, but in the end I spent five hours sewing (in the wrong colour), unpicking and resewing it and I thought I would never finish in time, despite having spent two months on it. It was very difficult to photograph: the photo above gives a good idea of the colour and the one below shows the trapunto better. 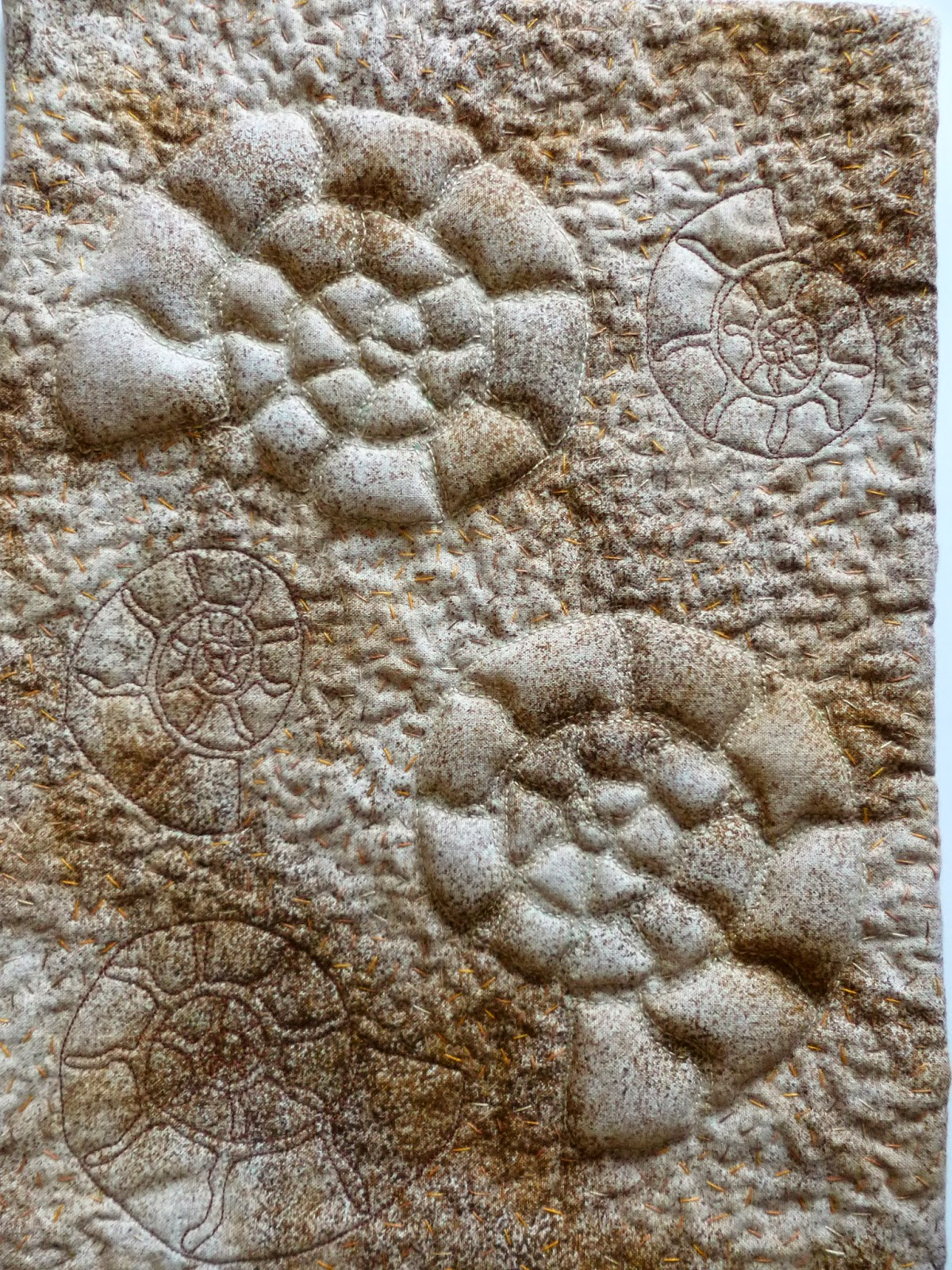 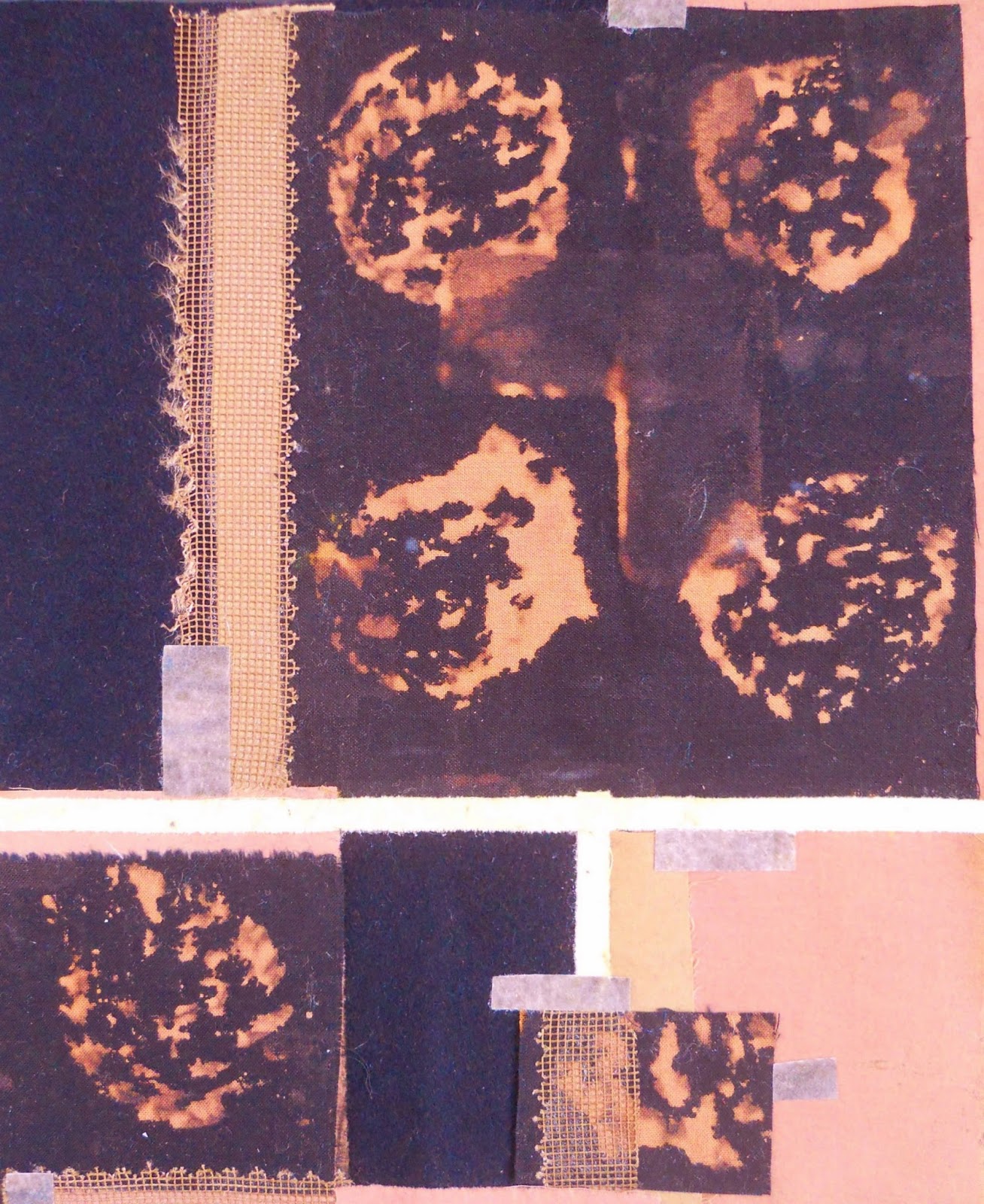 The colour of the soil in Kenya where we spent a few weeks this December was very red and it seems to have been imprinted on my visual memory. No matter what I produced for the challenge, the colour of sand was never a warm grey or brown or yellow but always a bit pink or rust. I have finally given in and settled on this selection, as it does celebrate a warm neutral as its central theme .The black cotton fabric was discharged using cascade dishwashing liquid and a round brush.

Posted by michele at 13:11 8 comments: Links to this post

Having just finished reading a book on stitch by Helen Parrott it seemed logical to attempt sand ripples for this piece. The first lesson learned was about scale - too many ripples resulted in a near ric-rac effect!

I layered up a piece of lightly rust dyed fabric made during a recent workshop with Alice Fox and used the rust marks to guide my lines of hand stitch. Once the stitching was complete I rollered the surface with acrylic paint in an attempt to achieve more depth.

I'm looking forward to seenow others have interpreted this challenge as I failed miserably to come up with an original response! 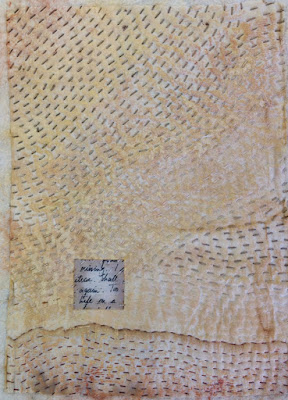 I must admit I was completely thrown by the colour, but hopefully rose to the challenge!  It took me a while to get the creative juices flowing but hopefully got there in the end.

I decided that I would do something completely different and so out of my comfort zone, although to be honest still like 'neat and tidy' which must be in the genes, so how to do something out of the box for me?

I found some hessian and then decided to do a textured design using different materials in opposition to the rough texture of the hessian.  I used chiffon in the top right which I very unsuccessfully tried to burn and now wish I had used organza, but by then it was too late.  I covered some of the chiffon with dyed scrim and then made cords and applied those.  Thereafter stitched using varigated thread in sections and in retrospect wish I had also incorporated hand stitching to marry the stitching with the concept.  However, I am relatively happy with the result and am glad I tried something different, for me anyway.  Perhaps I will do something else in the future using the same background but experimenting further with the ideas I have had since finishing it, and pushing my limits further.

Inspired by the colours in the photo plus sea, sky, objects found and lost and, as suggested by a friend, a sail (though I think from the angle the boat is about to capsize!).
I am quite pleased with this piece.  Abstract is not my forte and I even got to do some hand sewing.

The organza is rust and tea dyed.  The striped fabric was in a pack of small pieces of a lovely variety of coarsely woven fabrics - years old.  The slashes are cut from three layers of fabric which have been bonded together using Heat 'n Bond Ultra which gave me a lovely stiff piece to work with. Background is silk.  Ribbon and buttons from stash.

Hilary
Posted by Hilary at 08:10 12 comments: Links to this post 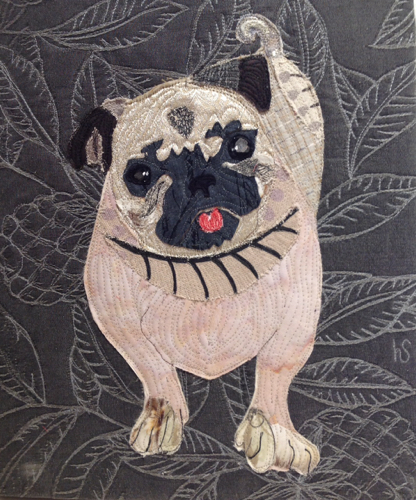 As soon as I saw the challenge colour I knew I had to depict my beloved pug Lucy. Inspired by the incredible found-paper collages of Peter Clark, I attempted to convey her adorableness and loving personality, but I fell short of my aspirations. But no fear, I will try again. This piece is more "cute" than artistic, which is not what I was going for.

And here is the real thing, along with Chloe, my beloved golden/ Collie mix: 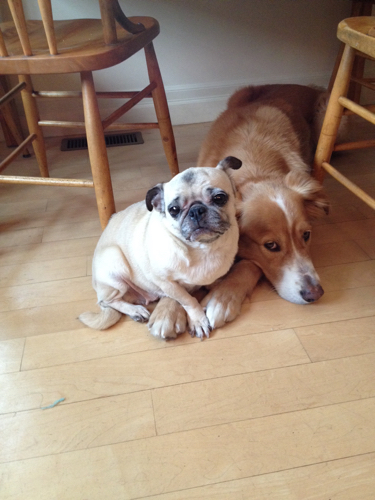 Posted by Helena Scheffer at 08:00 11 comments: Links to this post

Ever since my visit to Prague this past October, I have wanted to bring to life one of my many photos of the city's architecture.  I decided this was the perfect subject for our Sand challenge. Below is the original photo for comparison. 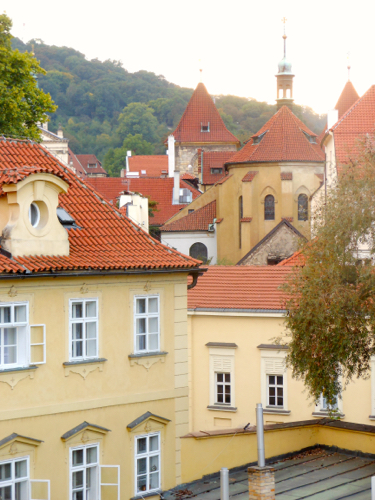 Posted by Heather Dubreuil at 07:00 12 comments: Links to this post 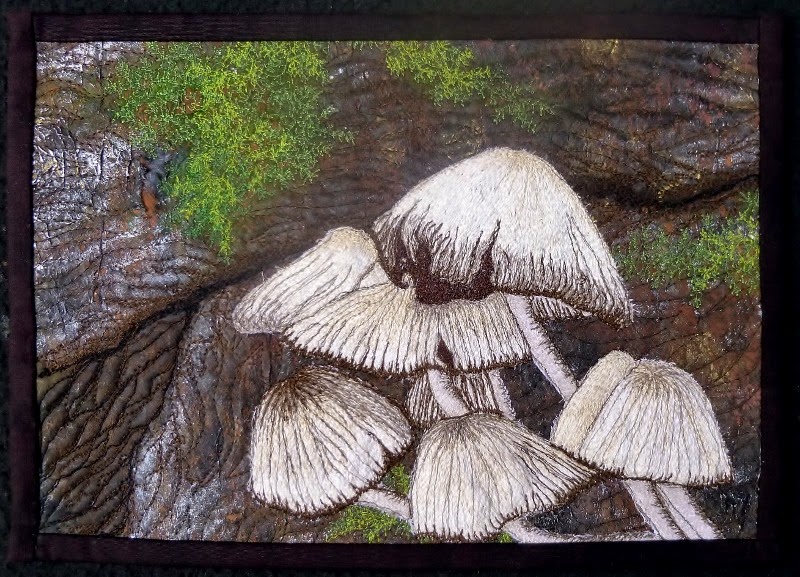 At first my heart sank when the colour was unveiled .... I very seldom work in these colours. A walk around a dam while on holiday in the Drakensberg in November gave me my inspiration - little mushrooms growing out of the bark of a very damp and dark tree. They are not as sandy coloured as they should be in the photograph but you can see a smidgen. I had great fun in the end and do love it. 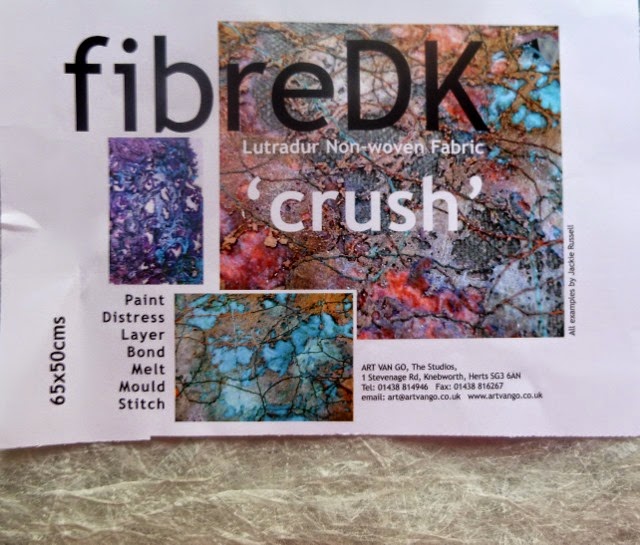 .. this is it painted prior to using.

My difficulties were that I used 'misty fuse' to fuse it to the background fabric, stitched and then tried to burn and distress. There were too many resists stopping it from burning. I should have burnt it before stitching. Note to myself.

The green embroidery was added at this stage.

I then drew the mushrooms onto white cloth and free motion embroidered them ....cut them out and stitched onto background cloth of fabric and crush.  Paint sticks were also used.

There is something about the starkness and the paleness of the landscape that I really love in wintertime.  Any colour really stands out.   The photo below is from fields that we often drive by and they are delineated with trees that provide some wind break.  In this area I liked the perspective of the horizontal lines of trees receding into the distance.  However I didn't want to copy Elizabeth Brimlow's format, which I have always admired.  So this is my little token.

And at this time of year with our unseasonably cold weather the idea of sand and sun is most appealing, but this is more the way it is here! 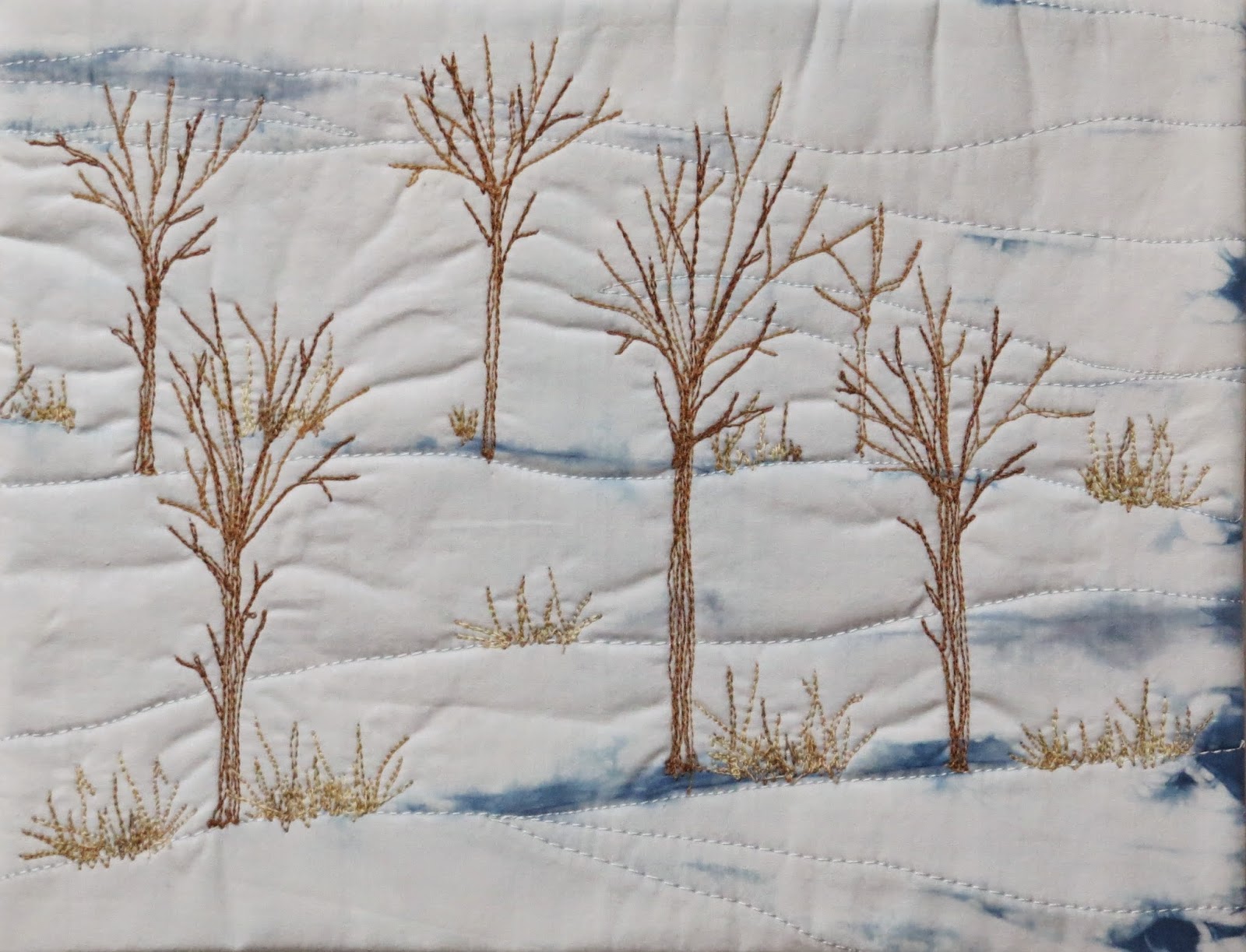 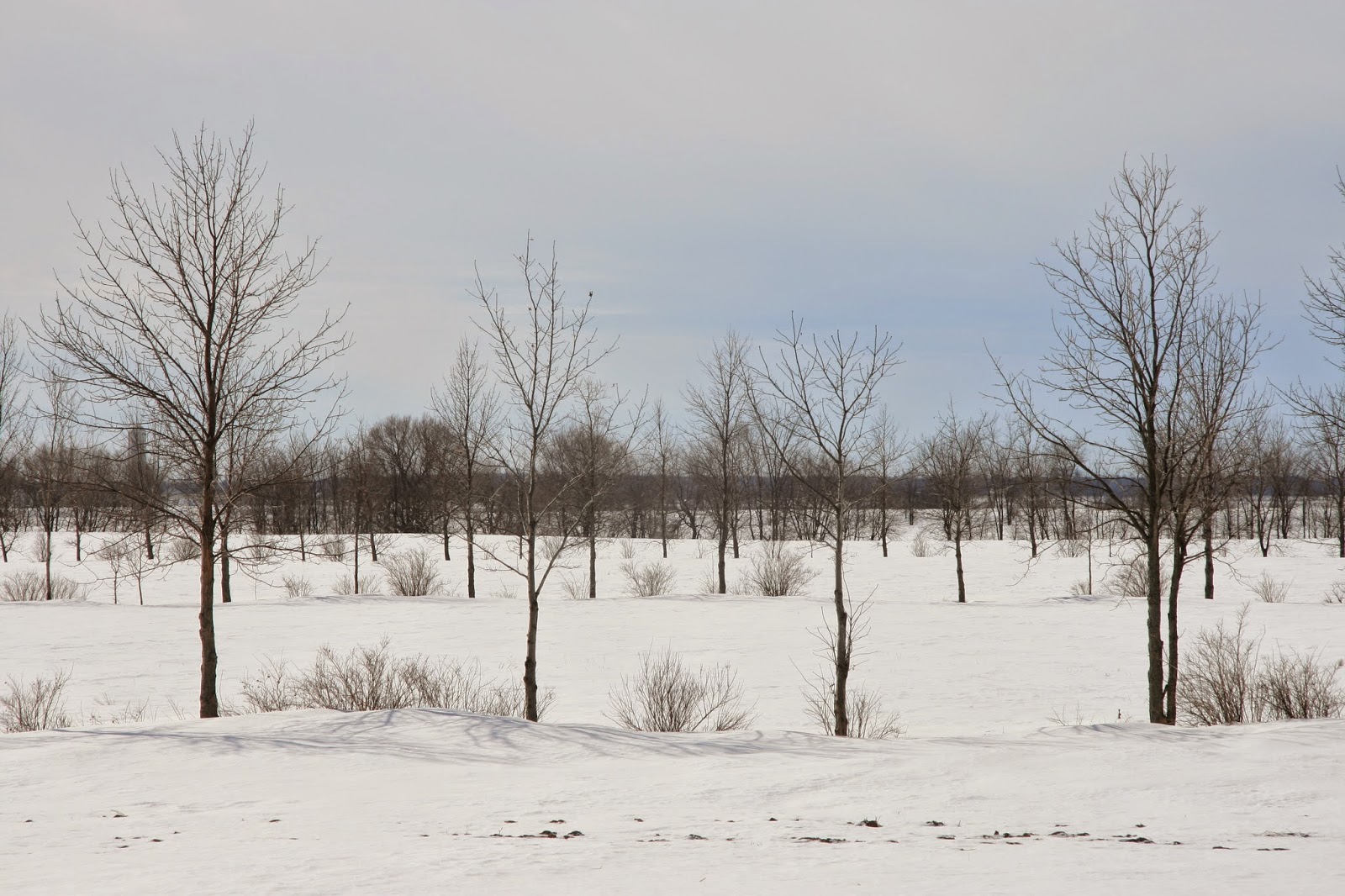 Posted by Dianne Robinson at 03:00 11 comments: Links to this post 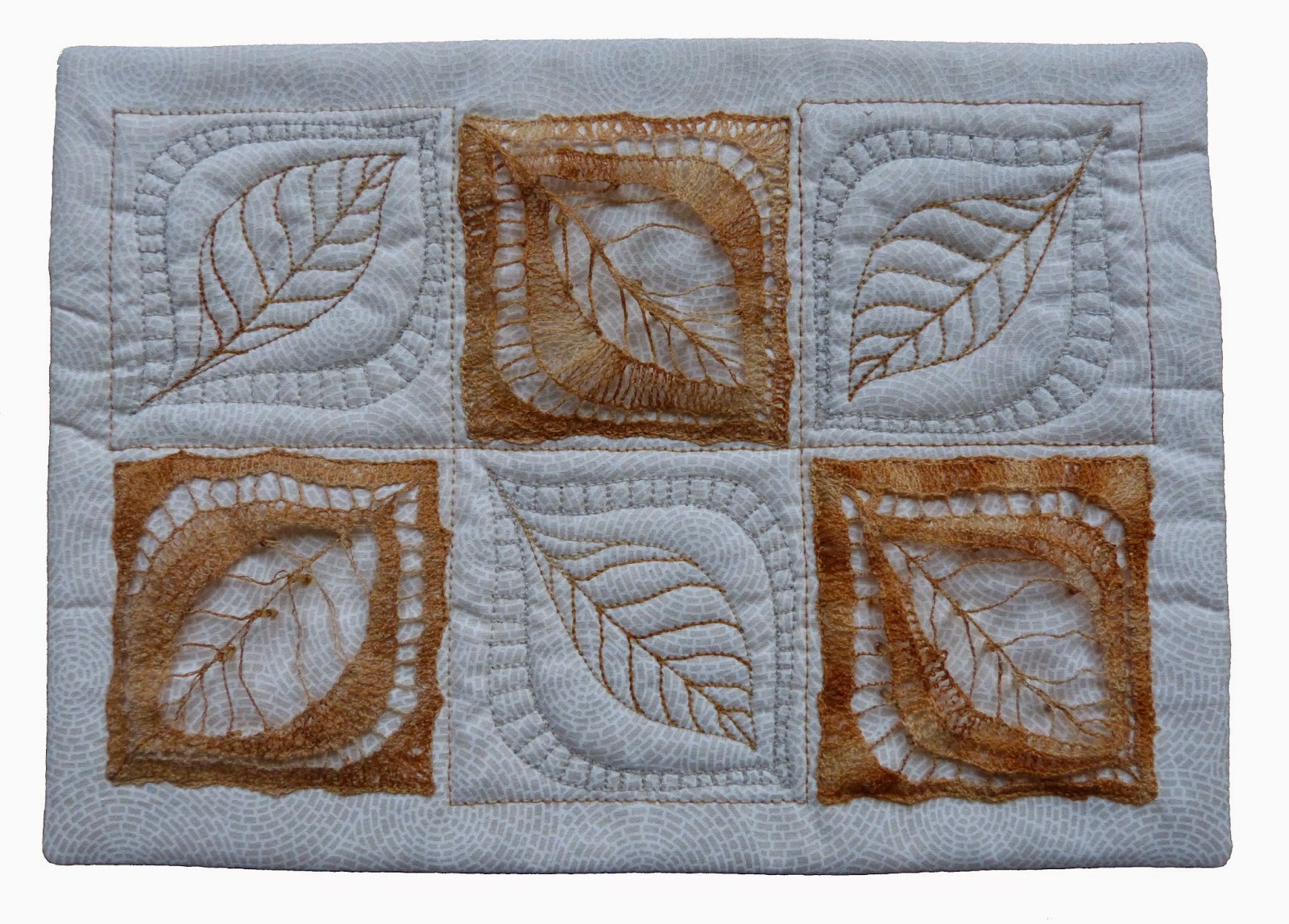 Some time ago I saw a piece about an artist making pictures by thread painting on dissolvable fabric, then mounting them on board.  She used pins or nails to hold the pieces in place, such that they had a 3D shape, and the shadows of the work created the image as much as the thread.  Sadly, I've forgotten her name, but the thought stayed in my mind, "how could I do this just using thread and fabric?"

This is my first attempt, using leaves sewn with a sandy coloured thread, mounted on a quilted sandwich.  In the detailed photograph I hope you can see how I have tried to achieve the effect. 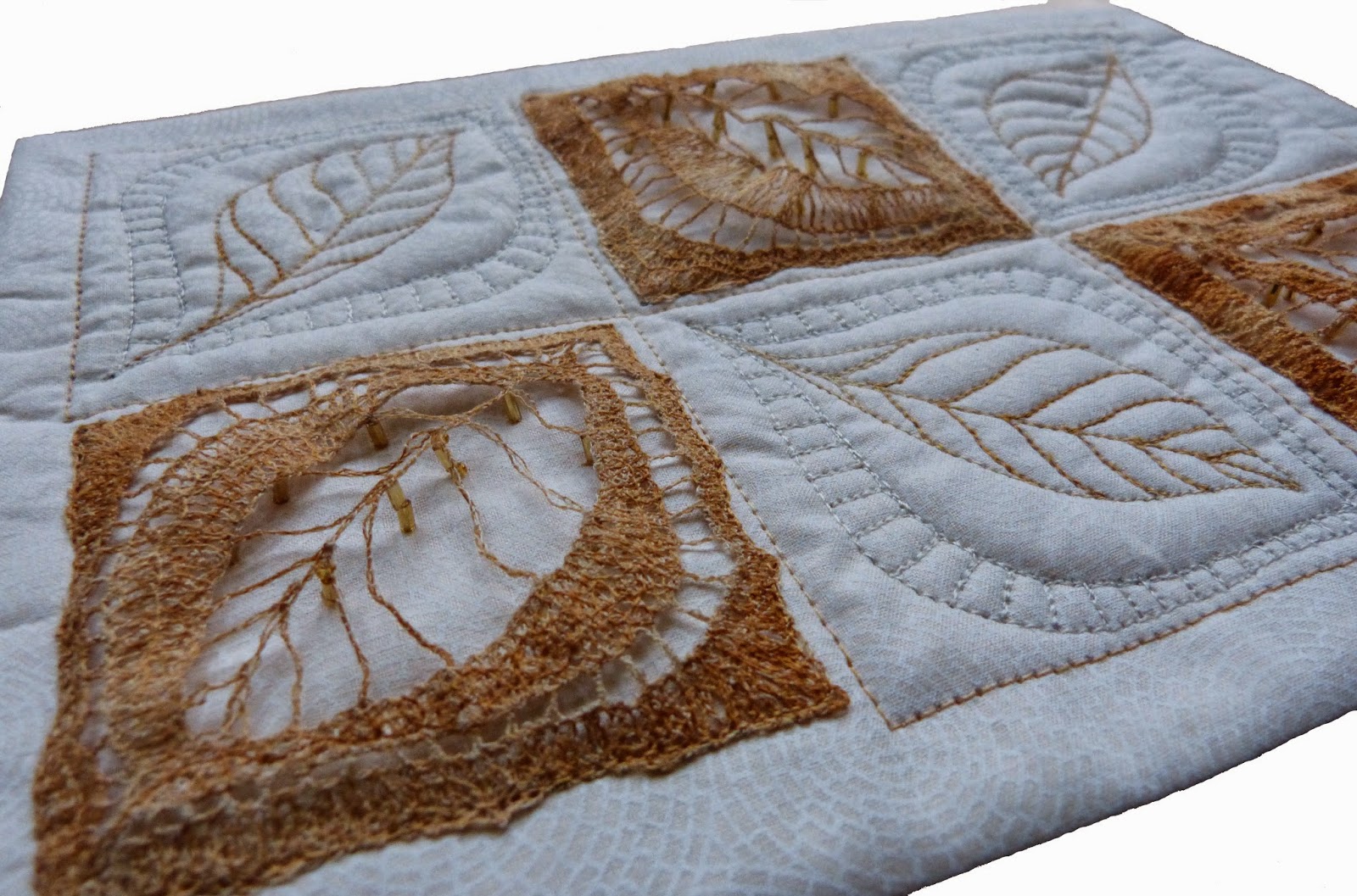 The thread work was done on dissolvable fabric, then mounted onto a small, specially made and shaped, block of polystyrene.  Then it was washed to remove the fabric and allowed to dry with a domed shape.  After it was dried I attached it to the background, then added beads to hold the dome up.  It has worked reasonably well, but I need to think the sewn shapes through more, to get more detail in the shadows. 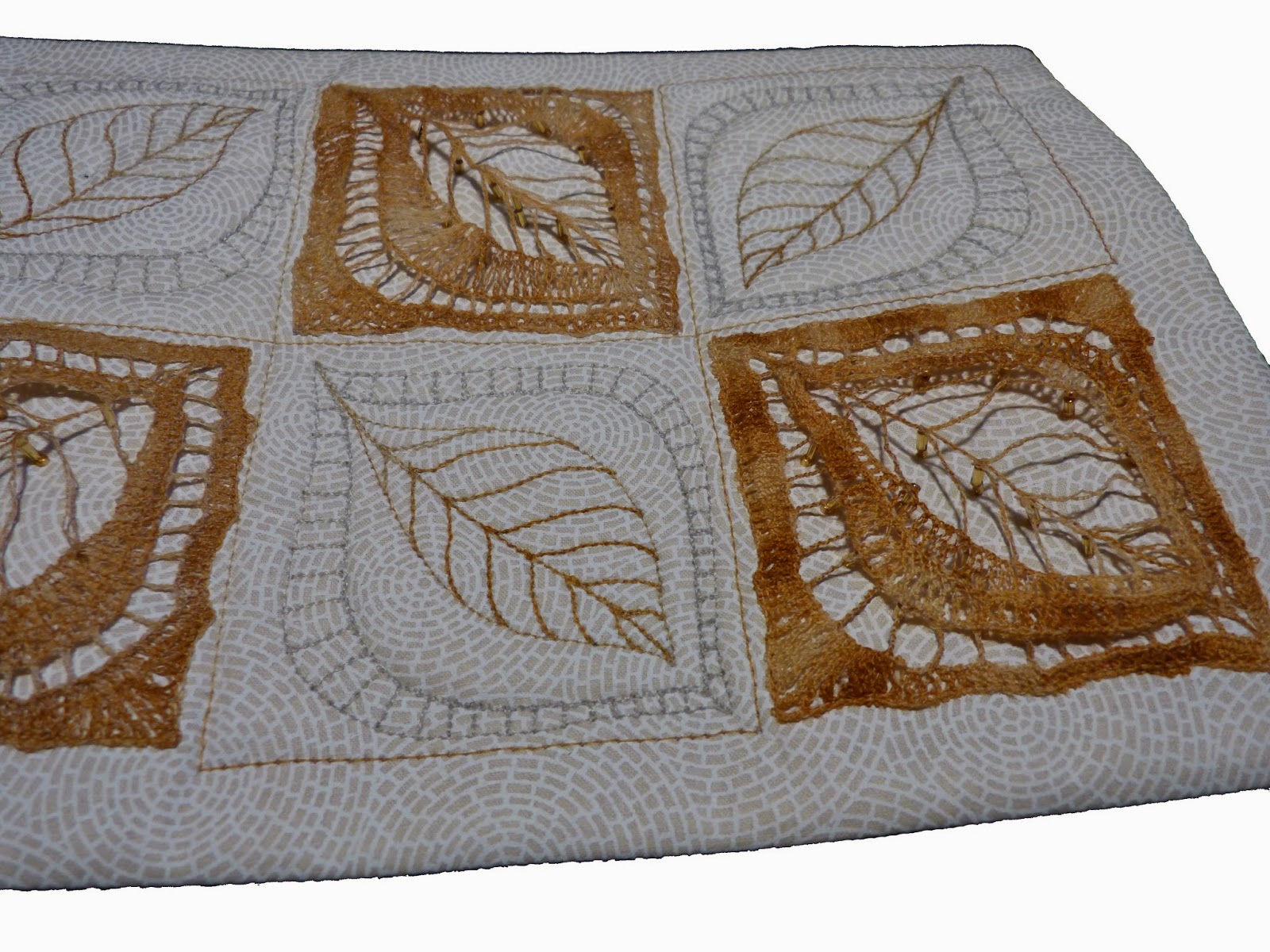 In the second detail photo I have tried to light the piece so you can see the shadows, but I feel they are too puny - the lines need to be thicker to get the effect I want.  I'm still thinking of making a bigger piece using this technique, but unless I can find an inspiring idea for the shadow work, then I'm not sure it is worth the effort.

In the meantime, I'm enjoying a long break in New Zealand - and hopefully blogging about my experiences on lindaforeytravel.blogspot.com
Posted by Linda at 03:00 18 comments: Links to this post

While in Mexico a couple of years ago we were fortunate to watch a sea turtle lay her eggs. To avoid poaching, the conservation authorities arrived quickly and dug up the clutch which comprised of 50 eggs. We were delighted to be part of the release of about 50 baby turtles a few days later. Here is one edging toward the ocean. I revisited the mosaic technique as it's something that I enjoy and added a simple piping to the binding. 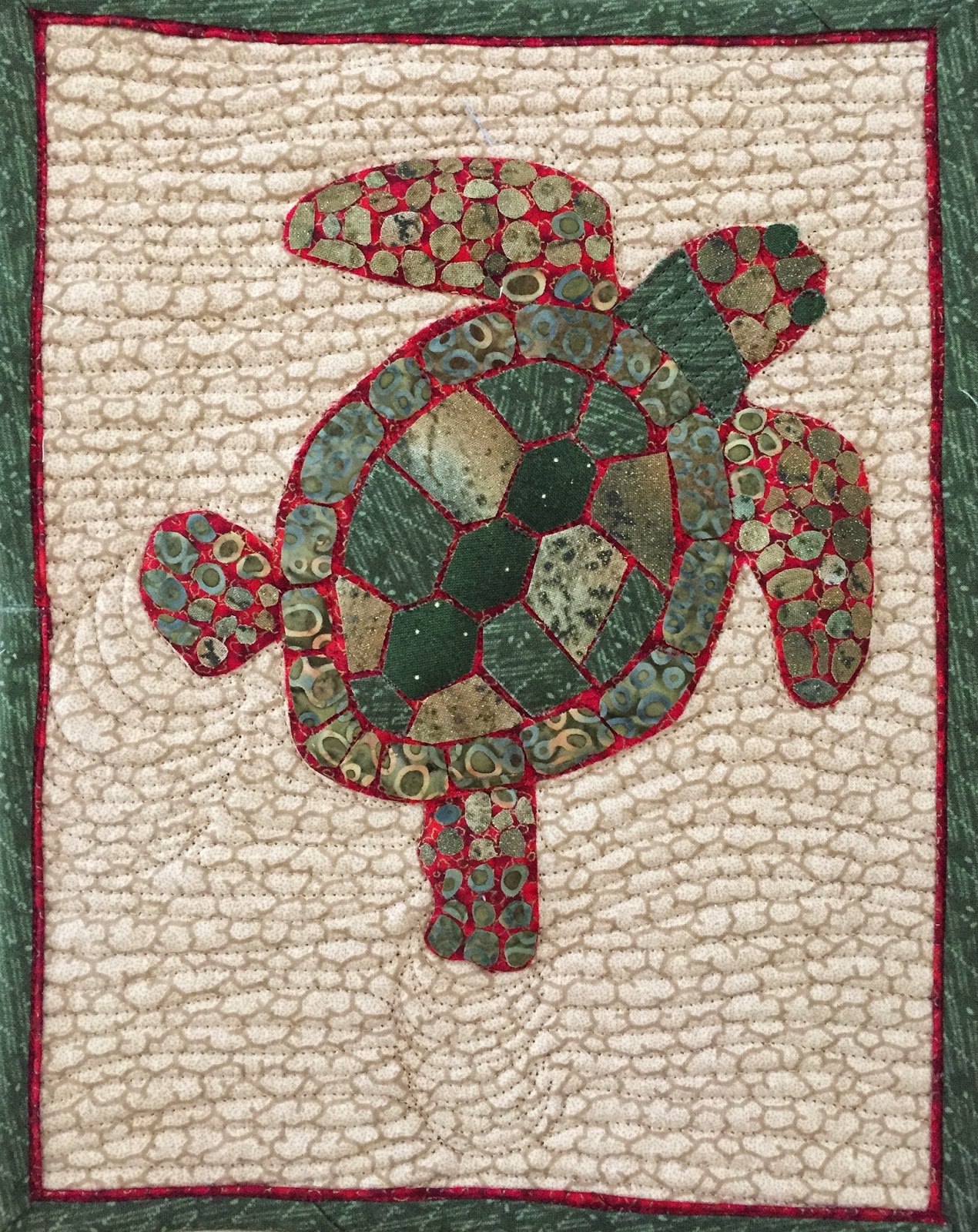 The next colour challenge

Oops,I nearly forgot to select the next person to chose a colour. Only 4 names left in the hat.

Jinnie, choose your colour and let us have an image of any sort to give us a clue please.

Reveal day tomorrow - I'm looking forward to see what everyone has done.