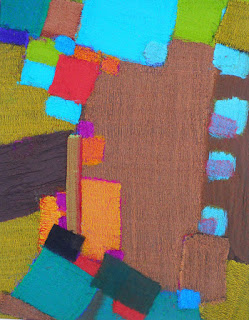 I am pleased to have sold this needle felted silkwork from the series seen below to one of my gardening clients, who is a retired prof from the art department of Concordia University in Montreal. It was very rewarding for me to see it hanging in her front hallway where she said that its placement was to compliment the colours of the Jack Bush on her landing (a print) and a small  Edouard Munch on the opposite wall. I was very tickled that she was so happy with her purchase and that she was so generous in her encouragement. Big smile all day!
Thanks also to Heather for taking this photo and for the offer to hang the series this summer at our local medical center where she curates a gallery for the pleasure of patients in the waiting room. It encouraged me to get them into some simple gold frames and to think in terms of a series. 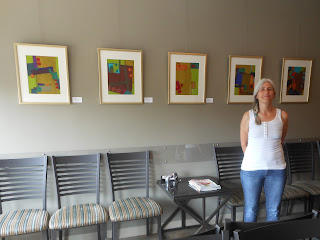 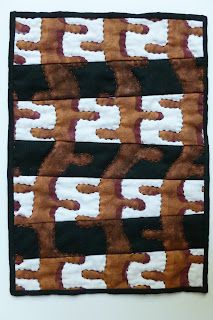 I have added copper markal paintstik between the quilted lines on the black and I think it looks much better and far more cohesive, though there is still too much black. When I first made it, I tried to get around the problem of the piece of printed fabric being to small by photocopying it, cutting the copies in various ways and placing it on black paper to see what it would look like, but I could not find a way to do it without the quilt being smaller than it had to be. However it was a first try with my stencil and I am not  intending to leave it there and will definitely play around with it more. Up to now I have a small stash of fabrics that I have printed, plus some samples and several small pieces like this, but I think I need to start working on a larger scale to be able to make anything of it. In case you have not seen it the site http://www.culture.gouv.fr/fr/arcnat/megalithes/index.html gives a good brief introduction and has some lovely photos. I tried to give the link to the English page on Gavrinis, but it would not let me, so just change the language to English at the bottom of the page, and look at the page 'Megalisme in Morbihan' to find the information about Gavrinis. The other sites are fascinating too. I first became interested in the carvings twenty years ago when we were on holiday in the area, having seen photos of them. However I didn't get to see the real thing until three years ago, when we went on a trip to the island. The carvings were fantastic, but I was a little disappointed as we only got see them by the light of a single torch, so they weren't quite as amazing as they appear in the photos when they are so well lit!
Posted by Jinnie at 14:53 1 comment: Links to this post

Pamela has decided to take a sabbatical from the group - for now.  Her life is rich and full but these last few months have left little room for making her little pieces in the various challenges.  She has been a member since the beginning when several of us met in our hotel rooms in Houston and the kernel of the idea was muted.

Thank you, Pamela, for your contributions.  You have shared so much with us over the years.  Enjoy your family and your various celebrations and we look forward to welcoming you back some time.

Hilary
Posted by Hilary at 12:43 3 comments: Links to this post

I'm sorry for the late arrival. I cannot explain my decision to stitch this so intensively, there was no artistic motive it was just a one of those thoughts that came from nowhere. The glass rings are paint - I'm a lot more careful with my wine than this!
Hilary, our PC died this morning so the photo is an iPad shot - I'll mail you a better image once our PC has been to see his doctor.
Now I can go and see what everyone else has done, I've been holding off as my reward for finishing. 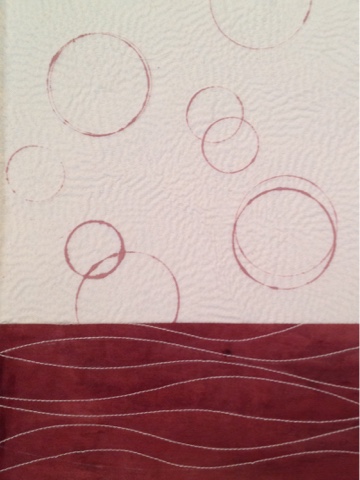 And the next challenge is... 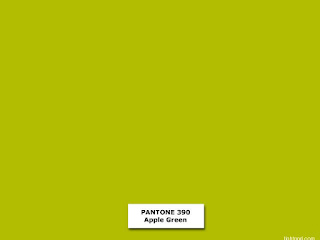 Actually, if you mix 50 parts warm yellow with 1 part black, you get something like this colour, which I have always found intriguing. Some of you may call this "puce green" but that's just opening up another can of mashed peas.

Posted by Heather Dubreuil at 11:28 4 comments: Links to this post