I went the other day to the Forney Library, which is a specialized art Library in Paris, and quite by chance found a copy of Jinny Beyer's  "Designing tessellations: the secrets of interlocking patterns", which I was able to borrow.  She explains the symmetry of them and how to make them. There is a section on Escher's complex designs and she shows how she thinks he developed some of them. It could be useful: I'm trying not to be at the last minute!
Posted by Jinnie at 20:54 3 comments: Links to this post 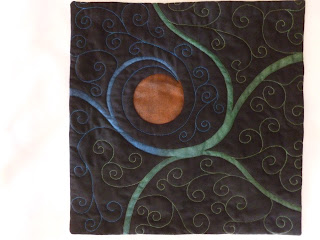 I have finally finished my Alex Janvier inspired quilt and am at last up to date. I was not inspired by one particular quilt, but by the lines and curves of his art in general. At first I tried marbling with shaving foam, but  I ended up with a mess that was unusable, so it was back to square one. I then tried playing about with swirling lines until I decided on this design, which I decided to try on a black background instead of a light coloured one. I drew the design then cut it apart and used it as a stencil with markal paintstiks. I then machine quilted the other swirls.
Posted by Jinnie at 16:07 4 comments: Links to this post

Not sure whether this is the right spot to ask this question - .... BUT: does it have to be a picture/painting by the artist that is used as an inspiration for a challenge, or could it be anything about the artist that sets off inspirational process?
Thanks for feedback/discussion of this item.
Posted by Uta Lenk at 08:11 4 comments: Links to this post

Remembered I have a puzzle. 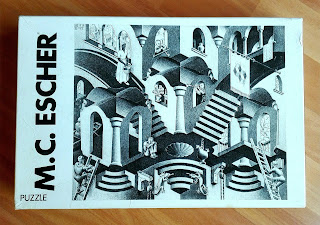 Posted by Phil Fisher at 15:40 2 comments: Links to this post

Artist for the next quarter is....

When we lived in The Netherlands, I was so impressed by many, many Dutch masters and their incredible works. The Hague is the home and studio of my favorite artist, M.C. Escher! I can't wait to see what you create!!
Posted by Venetta at 03:23 14 comments: Links to this post 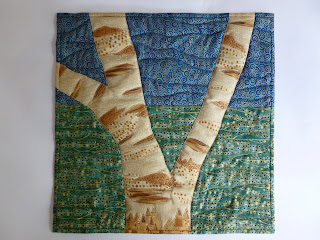 I love Klimt's patterns, but I find a lot of his paintings have too much pattern. It is a bit overwhelming, especially with all the gold. I much prefer his paintings of birch trees and decided to combine both pattern and a single birch tree when I discovered some Klimt inspired patterned fabrics in my stash that I bought quite a few years ago. I was intending to include leaves hanging down, using patterns from the fabric that seemed suitable. However they looked more like seaweed. I then thought of adding some smaller birch trunks in the background, but that did not look right either. So it is a single birch in winter. I would have posted this yesterday, but for the realisation that I couldn't finish it with a facing as I usually do, as the extra wadding that I put under the tree made that part too thick  to use this method. So instead of spending about an hour and a half in putting on a facing, I spent 6 1/2 hours sewing, unsewing and resewing (repeat several times!) a pieced binding as I did not want to put a 'frame ' round it with a single coloured binding. I will avoid doing a pieced binding in future! By the time I finished it, there was not enough light left to photograph it, so I left it until today. I had hoped to  finish my Janvier quilt yesterday too, but that will have to wait until next week now.
Posted by Jinnie at 15:32 7 comments: Links to this post