I had never heard of Shamia Hassani and I liked her work when I first discovered it. However, I could not find anything that inspired me to make a piece of my own; her images are simple with a powerful message, and I did not feel I could use either her images or message as they are not mine.  I kept looking at her work and the only thing that I felt I could use was the lace-like stencilled backgrounds that appear in some of her work, but didn't know what I could put in the foreground. By the beginning of February I was beginning to think I was completely blocked. I looked through photographs of her work again and came across one that was in an exhibition in Kabul, that I had overlooked. I like the way in which the stencilled background becomes a part of the foreground of the clothing,  and the outlines of the figures. 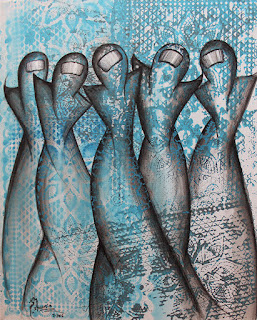 I go to a german conversation group here in Paris, and one of the articles that we read and discussed recently was about the memories of the two authors had about their grandmothers. This started me thinking about Nan, my paternal grandmother, who lived just round the corner from us and who was very important to me when I was growing up. When I was in England last summer, my aunt showed me all the photos that came from Nan's and gave me a duplicate of one of them, as I had no photos of her. It was taken some time in the fifties in Meadow Mill, one of the many cotton mills on Stockport, none of which remain. I remember her telling me about working in the mill, and also the hat factory, although unfortunately I cannot remember any of the details. 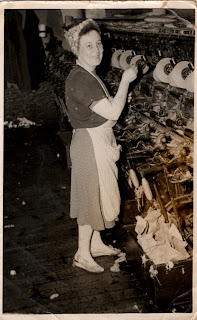 I decided to use the image of Nan in silhouette and to quilt the details. I had a stencilled background sitting in my stash: I had tried out some new spray fabric paint, using one of those mats that you use in the sink as the stencil. I traced the photo and enlarged it, making a positive and a negative stencil, which I used with some Markal Paintstik. 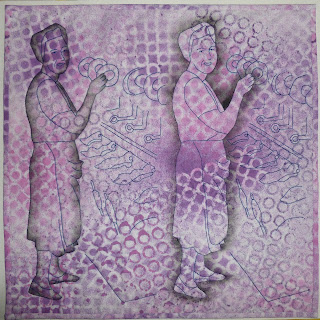 At first I thought to use just the one figure and include something else with it, but couldn't think of anything, so decided to do a positive and negative stencil. I think it would have been better suited to a rectangular format rather than  a square one as the balance is not quite right, but I am pleased with the  image and all the memories it brought back of Nan.
Posted by Jinnie at 15:27 11 comments: Links to this post

Shamia - an interpretation, and a confession

I was thrilled with Claire's choice of Shamia Hassani as our next artist for interpretation. I browsed the internet, and was fascinated with her inclusion of pianos in her works, as we are a musical family. 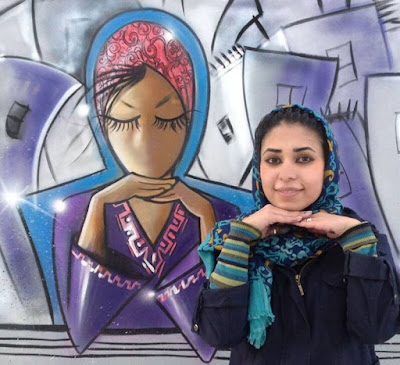 At first I thought I was going to literally interpret this, and played around with photoshop filters. 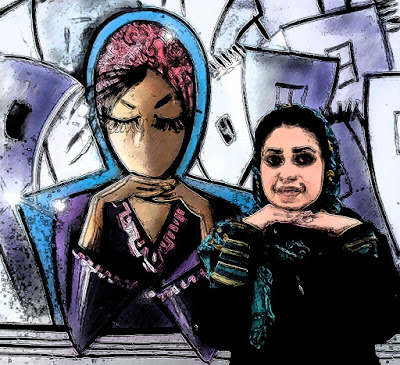 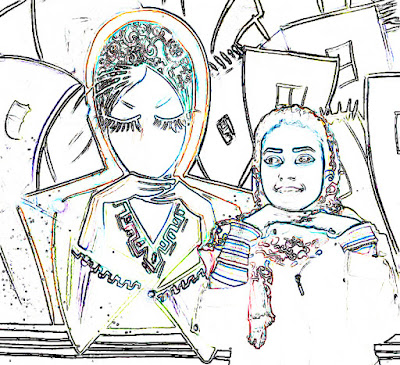 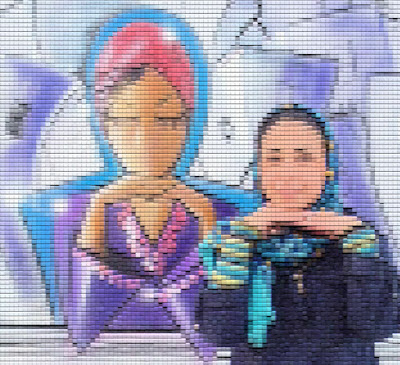 Then I arrived at this variation of the photo. 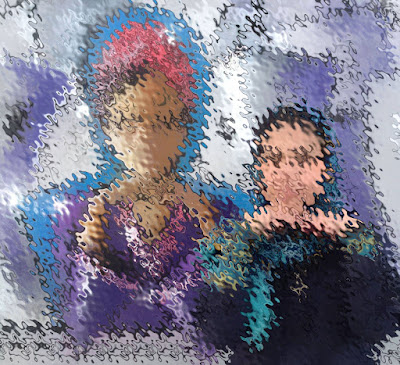 And chose to take one little detail of it from the lower middle of the picture.

It is so small in pixels, that I would have to enlarge the fragment, but that is not a problem.

But I also had to face the truth after Hilary's call to action in November whether I was still with the group - she held up the mirror to my face. And although I loved this idea, I never really had the leisure to sit down and work it through, put it into textile. Already in November I had understood that I would have to resign from the group, because my changed professional situation does not allow me to keep up with the rhythm of the challenges, although I love the idea, I like the community and I think I need some input like that. Life is not premitting this right now. Although I wanted to withdraw with a completed work, this did not happen, which makes me very sorry. I apologize - I will follow the blog and your developments and I do hope to meet some of you somewhere again.
Posted by Uta Lenk at 08:28 9 comments: Links to this post