The saga of the Graffiti quilt

The theme for the Guild challenge at the Festival of Quilts this year is 'Summer in the City'.  I have long wanted to create a quilt about graffiti so this seemed to be the moment.  Funnily enough, it seems to be a popular theme as I keep bumping into other graffiti quilts.  I did my homework buying books off Amazon (cheap second hand ones - amazing art around the world!), watching videos on YouTube - very good, sourcing textile spray paint and the special nozzles to give you different effects, taking photos locally - brilliant lottery-sponsored bridge walls, practising - you name it.

First I constructed my wall using a variety of commercial, hand dyed and hand painted fabrics.  I knew I didn't want to sew the bricks in place so I used Heat-n-Bond Ultra which is a heavy duty, no-sew fusible.  I quilted only the grout areas and then bound the quilt.

My tag is made up of a font I got off the internet (amazing fonts available there!).  The original plan was to spray paint the whole tag.  First step: spray the whole background with a layer of white which will provide a good base for the colours to come on top.  I used Fablon for the stencil - it stuck beautifully although I had to be careful with such a large hyper-sticky, floppy piece of plastic!  Problem #1 - one small can of white paint doesn't go anywhere near far enough. 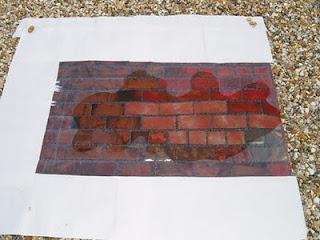 So I added several more layers and ran out of the textile spray paint.  Still not enough cover. 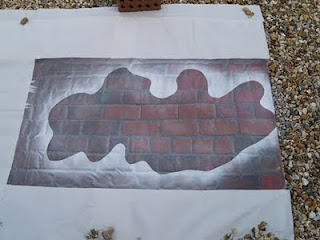 At this point I decided to try my son's old model aircraft spray tool, so thinned some Jacquard white acrylic paint - I couldn't get the tool to work so assumed wrongly as I found out later) that it was broken.  Panic is starting to creep in (I have to have this quilt up in London by the end of July) so I decided to use the thinned paint and just paint a layer on.  Bad decision!  One of the fabrics had loose dye which seeped up into the white paint.  I can confirm that white plus terra cotta equals pink! 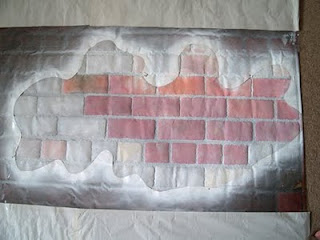 A call for help on the Complexcloth message board brought a suggestion from Bob Adams - no less!!!  But thinking about the problem I realised that the solvent based sprays hadn't been a problem so off to the diy store.  A tin of matte spray acrylic paint off the shelf (and having to call an assistant to verify I was of an age that if I wanted to get a high on sniffing it then it was my own problem!) and the problem was solved - a nice white background.  You can see how nicely the bricks pop forward. 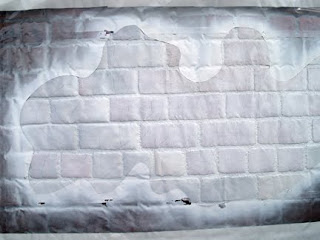 Now to tackle the colourful bit.  The nozzles proved useless - fine, ultra skinny, extra fine, needle - all the same and none of them sprayed in a fine line with just a small soft edge.  So I decided to hand paint all the coloured letters.  I left the Fablon on to protect the rest of the quilt.  Here it is not quite finished. 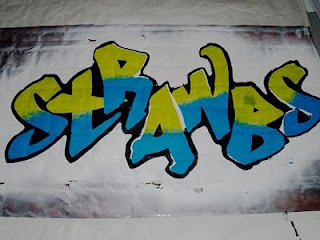 At this point I decided to lift the stencil to get on with the rest of the graffiti.  Disaster!  The glue from the Fablon stuck to the quilt top AND the white paint had seeped under the edge of the Fablon and made a horrible mess.  Whether it was the thinned paint or the spray - who knows?  I guess the Fablon had been on far too long and I had been leaning on it while I painted the letters - it has also been quite warm here.  Fortunately we have something here in the UK called 'Sticky Stuff Remover' which is an orange oil product and this lifted and removed the glue.  It hasn't left a residue or caused a problem with any more painting.  But I had to work out how to deal with the horrible mess around the white background.  Time is now very short and I considered spraying the edge but that would entail masking the whole of the coloured letter area.  I decided to hand paint over the mess and create another outline - a bit bumpy rather than the smooth curves of the original design.  It needed two coats and no thinning to balance the spray/hand painted areas.

The next job was painting a couple of the sayings.  The 'God save (y)our queen' is a personal memory from a railway bridge in my childhood in South Africa.  Not completely put off by the first experience with Fablon I did the Che Guevaras with spray paint and can vouch that it's fine as long as you remove it straight away (and the paint is dry!). 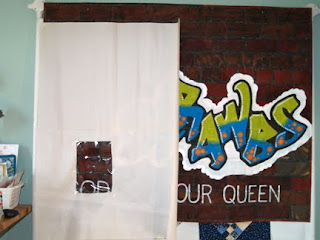 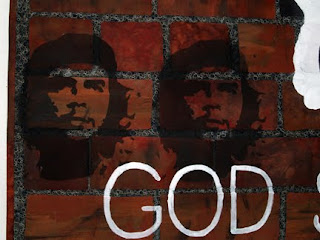 Yesterday was a good day - no major problems.  The rest of the hand painting went smoothly and the Ban the Bomb was another Fablon sprayed stencil.  The last thing was the sprayed scribbled tag that you see so often where youngsters have 'vandalized' walls and other graffiti art.   This is where I discovered the model spray tool wasn't broken but the paint disappeared into the fabric - the colour was wrong and it has finished up a bit messy - but I reckon that's OK as that's how it is in real life.  Here is the finished quilt. 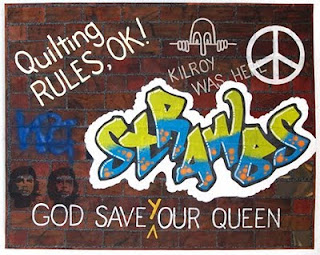 I'm pleased with the end result and I hope it brings a few smiles to the viewers.  I can't believe the difficulties that I had face - would I do it again? Yes.